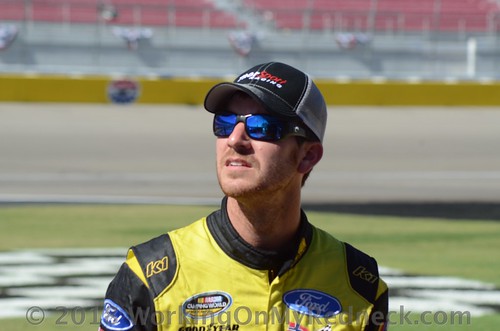 Just about everything that could have gone wrong did go wrong for NASCAR Camping World Truck Series title contender Grant Enfinger in Friday night’s JAG Metals 350 at Texas Motor Speedway.

Early on, Enfinger’s No. 98 ThorSport Racing Ford fell back in race traffic. He was seventh in the first stage and fourth in the second, but as he was primed for a podium finish, his truck ran out of fuel on the final lap, dropping Enfinger to 12th at the checkered flag.

Eighteen points below the cut line for the no. 16 Championship 4 finale at Homestead-Miami Speedway, Enfinger likely will need a victory to advance to the title race.

“We just got held up by a lot of slow trucks at the beginning of the start, and that’s on me,” Enfinger said. “We spotted everybody a straightaway or so and just played catch-up after that. I feel like we might’ve had one of the best trucks here, and we just didn’t take advantage of it.

“We were in a position to run second or third there at the end, and we just ran out of gas. It’s not really a testament to our entire year. We’ll have to go to Phoenix (next Friday) and win the race.”