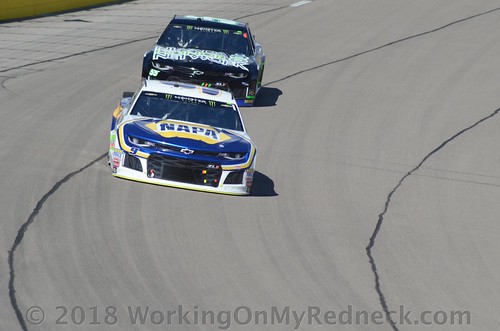 Just when he needs it most, the newfound speed that has carried Chase Elliott to a pair of victories in the Monster Energy NASCAR Cup Series Playoffs seems to have deserted the driver of the No. 9 Hendrick Motorsports Chevrolet.

On Friday night at Texas Motor Speedway, Elliott qualified 16th for the second race in the Round of 8—and a hard-fought 16th at that. In Sunday’s AAA Texas 500, he’ll have another fight on his hands as he tries to crack the top 10 and accumulate badly needed stage points.

After finishing seventh last Sunday at Martinsville, Elliott enters Sunday’s race 31 points below the current cut line for the Nov. 18 Championship 4 event at Homestead-Miami Speedway. A last-ditch run in qualifying got him up to the 16th spot, but that’s the deepest starting spot for any of the championship contenders.

“Yeah, just couldn’t drive into (Turn) 1 like I wanted to or didn’t do it or whatever,” Elliott said of his qualifying effort. “But, yeah, we have kind of fought some of the similar things throughout practice and didn’t go real fast. Just unfortunate.

“I had a terrible qualifying effort in Martinsville, too, and with the way these stage points are, that was a really strong suit of ours last fall. We qualified really good in these last 10 and that was what kind of kept us going through the rounds.

“So, yeah, you’ve got to qualify good to get those stage points. That last lap helped some, so we will try to move forward on Sunday.”

Unfortunately, Elliott found little solace in Saturday’s two practice sessions. He was 19th fastest in the morning session and 17th at 190.402 mph in Happy Hour. Kurt Busch, who topped the speed chart in final practice, was considerably faster at 192.075 mph.