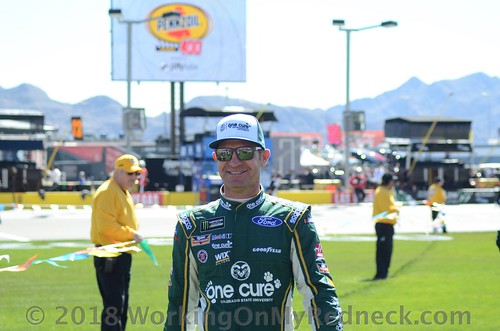 Point Standing: 7th with 4,041 points, 42 points outside the top-four cutoff.

● Dropped to fourth in the opening laps but began turning quickest lap times on the track.

● Pitted under caution on lap 46 and restarted fifth.

● Climbed back to fourth before the end of the stage.

● Told the crew his car was loose in and loose off the corners.

● Bowyer and William Byron made contact while pitting during the stage break. The No. 14 suffered minor front-end damage, but the crew kept Bowyer on the track.

● Dropped to eighth reporting his car was still loose.

● Crew made major handling adjustments at the end of the stage.

● Climbed to sixth in the opening laps of the stage.

● Bowyer continued to battle handling issues and dropped back to ninth.

● Pitted under caution with 110 laps remaining for tires, fuel, and more adjustments and dropped to 11th.

● With just 44 laps remaining Bowyer was clipped by Jimmie Johnson as he and Daniel Suarez raced in turn three.

● Bowyer’s spin dropped him a lap behind the leaders and to 21st where he finished the race.

●  Bowyer led one lap to increase his laps-led total at Martinsville to 572.

●  Joey Logano won the First Data 500 to score his 20th career Monster Energy NASCAR Cup Series victory, his second of the season and his first at Martinsville. His margin of victory over second-place Denny Hamlin was .107 of a second.

●  There were eight caution periods for a total of 68 laps.

“Obviously we are disappointed. We struggled all day trying fix our loose car, but we stayed in the top-10 until there at the end when we got spun. We lost a lap, and that killed us. We have two races left, and we’ll do our best to win at Texas or Phoenix.”

Playoff Standings: (with two races to go before the Championship 4):

SHR is the only team to feature all four of its drivers in the Round of 8.

The next event on the Monster Energy NASCAR Cup Series schedule is the AAA Texas 500 on Sunday, Nov. 4 at Texas Motor Speedway in Fort Worth.