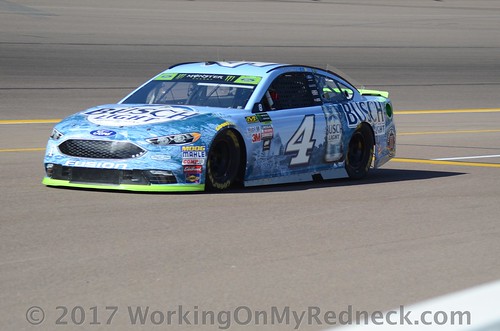 ● Harvick raced from 12th up to the seventh position by the first caution on lap 44.

● The team came to pit road for four tires, fuel, and a wedge adjustment to increase drive off the corner.

● The No. 4 Busch Beer Ford raced back up to the seventh position but fell back to ninth.

● The team came to pit road at the conclusion of the stage for four tires, fuel, and an air pressure adjustment.

● The No. 4 fell back seven spots after the start of the stage and fell a lap down on lap 258 as Harvick battled to find rear grip off the corner.

● Harvick was awarded the free pass as the first driver one lap down at the conclusion of the stage.

● The Busch Beer Ford came to pit road for four tires, fuel and several adjustments at the conclusion of the stage.

● He started at the rear of the field after taking the free pass but was able to gain two positions by the lap-365 caution.

● The Busch Beer racecar came to pit road on lap 365 under caution for four tires, fuel and wedge, and air pressure adjustments.

● Harvick returned to pit road under caution following a quick green-flag run on lap 389 for fresh tires and fuel.

● The No. 4 Ford raced as high as eighth on lap 466 but fell to 10th while battling Ryan Newman for position.

● The Busch Beer team held the top-10 position for the remainder of the race.

Kevin Harvick, driver of the No. 4 Busch Beer Ford Fusion for Stewart-Haas Racing:

“As the sun started to go down our speed was definitely better. Everybody just kind of hung in there on our Busch Beer Ford. Our goal is always to come here and kind of just not defeat ourselves with a horrible finish. We had a good day – a decent day, not a great day. We lost a few spots there at the end racing Newman. His car gets as wide as his neck there sometimes. You know, it is Martinsville and everybody is racing hard, and we wound up finishing 10th. Now we go to Texas and hopefully have a good day.”

● Joey Logano won the First Data 500 to score his 20th career Monster Energy NASCAR Cup Series victory, his second of the season and his first at Martinsville. His margin of victory over second-place Denny Hamlin was .107 of a second.

● There were eight caution periods for a total of 68 laps.

● Twenty of the 40 drivers in the First Data 500 finished on the lead lap.

Playoff Standing (with two races to go before the Championship 4):

●  SHR is the only team to feature all four of its drivers in the Round of 8.

The next event on the Monster Energy NASCAR Cup Series schedule is the AAA Texas 500 on Sunday, Nov. 4 at Texas Motor Speedway in Fort Worth.