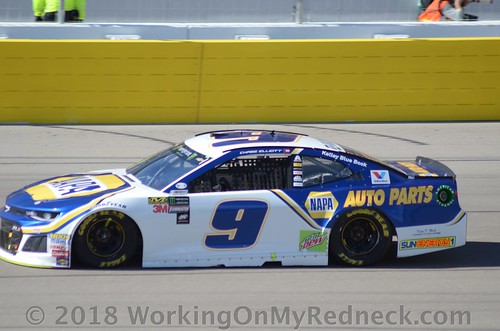 Chase Elliott made the most of a 19th-place starting position and a balky No. 9 Chevrolet on Sunday, but he left the First Data 500 at Martinsville Speedway underwater in the Monster Energy NASCAR Cup Series standings.

Thanks to excellent pit work adjustments that improved the car’s performance during the race, Elliott managed a seventh-place result, but he’s 31 points below the current cut line for the Nov. 18 Championship 4 Race at Homestead-Miami Speedway.

“It was just really bad, really poor execution on our qualifying effort and better in the race, but not near where we needed to be,” Elliott lamented after the race. “So, I’m sure we’re in a hole and probably going to have to win one of these next two races.

“We needed some pace. The guys did a great job on pit road and things to get us kind of back in the ball game, but definitely not what we want.”

Elliott doesn’t expect to be able to claw his way into the top four on points.

“No, I need to win,” he said. “I mean playing the points game is nice, but I need another sticker.”

The good news is that Elliott has picked up win stickers in two of the last four races, and he’s the only driver who has won two events in the Playoffs.