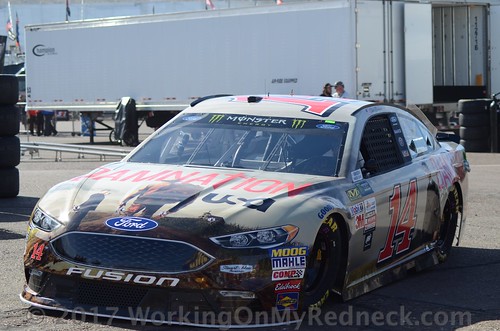 With Kyle Busch sitting in the front row, waiting for his turn at the dais in the Martinsville Speedway media center, Clint Bowyer seized on an opening to take a good-natured shot at his fellow Monster Energy NASCAR Cup Series Playoff contender before the drivers hit the track for final practice.

Asked to name his favorite Halloween costume as a child, Bowyer didn’t miss a beat in responding “Kyle Busch. It was pretty damn scary.”

“Ha! It was too easy, man,” Bowyer added. “No, my favorite? I don’t know. It’s all about having fun with your kids and trying to get more candy than the next guy. It’s about the competition. Leave it to a racer to make Halloween a competition, too.”

In Sunday’s First Data 500 at the .526-mile short track, the competition will turn serious. Bowyer enters the first race in the Playoffs’ Round of 8 three points below the cut line for the Championship 4 and 40 points behind Busch, the series leader.

Of the three tracks in the Round of 8 – Martinsville, Texas and Phoenix – Martinsville is arguably Bowyer’s best, but the driver of the No. 14 Ford, one of four Stewart-Haas Racing entries still alive in the Playoffs, doesn’t think a victory at NASCAR’s shortest Cup track is his only path to the Championship 4.

“I don’t think it is necessarily an absolute must-win,” Bowyer said. “You can’t put that pressure on yourself the first of three races. If you do, you’ll probably go out there desperate and make a mistake. We are not in that situation. We need to take care of business on a track that is typically good for me. That doesn’t mean you’ll go out there and dominate stages or get a race win, but you have to go out there and take care of business on a track that has been good to you over the years and take advantage.

“Yes, a win would be huge. You allow yourself to think that ‘If I win this thing this weekend, I’m in the dance.’ That’s a cool thought and something to think about an extra incentive… You can’t beat yourself. We have put ourselves in a hole before and I don’t think we can do it again.”