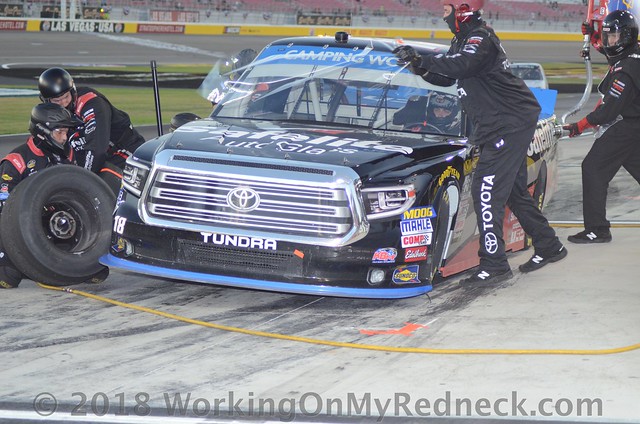 It was 11:15 on a rainy Friday morning, and NASCAR Camping World Truck Series playoff driver Noah Gragson was already on his second hot dog when he took questions from reporters at Martinsville Speedway.

“The first one was mustard and slaw,” Gragson said of the Martinsville dog. “I don’t like chili, but I got chili on the second one, and it’s not bad. It’s got a little beef jerky taste to it, so it’s not bad.”

The hotdogs may be a consistent amenity at the .526-mile short track, but the racing surface at NASCAR’s oldest Monster Energy NASCAR Cup Series facility is variable and fickle.

“I feel like this race track itself is different every time you come here,” said Gragson, who is third in the Playoff standings, 11 points ahead of fifth place, with the field set to be narrowed to the top four three races hence at Phoenix. “You can come with the same setup for 10 years and you’re going to run differently every single time. It’s just the way the track takes rubber.

“I feel like the weather and the temperature outside plays a big part in that.”

With persistent rain forcing cancellation of all track activity on Friday, Gragson was resigned to qualifying on Saturday morning with no practice.

“I’m coming back with a different setup than what we had in the springtime here, so not getting any practice, you can’t really lean on past success here,” said Gragson, who picked up his first victory in the series at last year’s Playoff race at Martinsville. “Just been trying to work hard with my crew chief, Rudy Fugle.

“He and I sat down. We had ice cream a couple days ago for about an hour and just talked about this weekend and what we needed to do about this round in the playoffs and then Martinsville and just coming here with a different setup. It’s going to be challenging.”