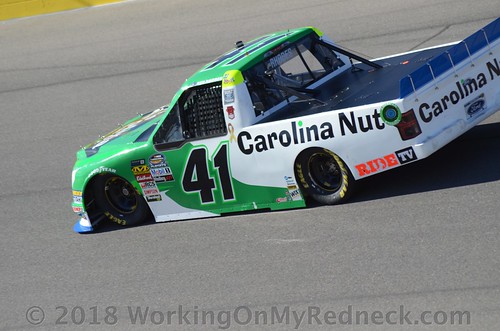 Team Info/Stats:
Crew Chief: Eddie Troconis
Driver Point Standings: 7th
Owner Point Standings: 6th
Playoff Position: 7th
Spotter: Lloyd Garner
Truck: No. 41 Carolina Nut Co. Ford F-150
Chatting with Ben Rhodes…
“Coming to the Texas Roadhouse 200 this weekend, we’re looking to finish what we started in the spring race at Martinsville. We came so close and led many laps, but we didn’t bring the trophy home. That’s a big disappointment for our team, and we’ve looked back at this the entire season with anticipation and excitement for the fall race. We know that we have a Ford F-150 that’s plenty capable to get there, and our whole Carolina Nut Co. team is determined to get ourselves a win and potentially an owner’s championship for Duke and Rhonda Thorson. I feel like this would be a good boost of confidence for our team, and really set a good tone for the remainder of the season. Even though there are only four races left, a lot can happen, and we’re hoping to make Martinsville spectacular for everyone that’s there.”