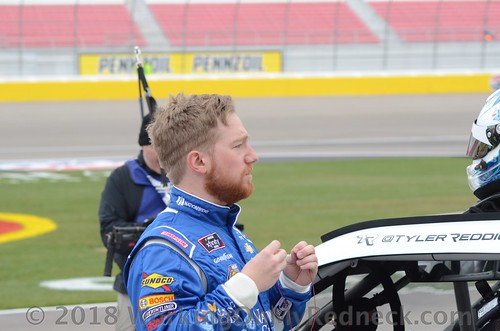 It looks like Tyler  Reddick will not be coming back to JR Motorsports for 2019.  There are garage rumblings that Reddick has been talking to some of the other NXS teams for 2019.

Dale Jr. said on his podcast that earlier in the season he had to sit Reddick down and have a talk. The new kid was fast but he was wrecking too many Camaros. While Reddick calmed down the results never came back around until the end of the season. Over the summer in a 9 race stretch, Reddick finished 22nd or worse 6 times. That’s not cutting it at JRM unless your name is Michael Annett.

To Reddick’s credit over the last 7 races he has 5 To-10’s with 3 Top-5’s in that time. His season is turning back around and as the points stand now he’s in the Championship 4 at Homestead. But there are two races to go so that’s a meaningless statement, take note NBC/Fox.

Daniel Hemric is moving up to the Cup Series next season at RCR replacing Ryan Newman in the #31. It appears Hemric’s Xfinity seat might be the landing spot for Reddick.

The #21 Xfinity team has been the class of the RCR stable this season even when Austin Dillon stooped down to the Xfinity Series. Reddick would be stepping into a car capable of winning races even if it hasn’t won one yet. RCR has a very formidable Xfinity Series team from equipment to (most drivers) they’re a solid team.

Reddick is capable of winning races, he won in 2017 for Ganassi and he has won this year. RCR gives him that opportunity but he’ll have to work a little harder for it that at JRM.

One other possible reason for this move that isn’t being talked about is cost. Reddick brings sponsorship/family funding. Fielding a car from JRM is more expensive than RCR. Moving over to the #21 isn’t a massive drop in performance but will likely be better on the old pocketbook!