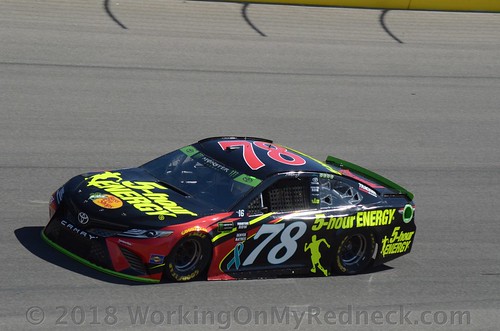 Martin Truex Jr. doesn’t sugarcoat his feelings about what the team needs to accomplish in the upcoming three-race Round of 8 playoffs at Martinsville (Va.) Speedway, Texas Motor Speedway in Fort Worth and ISM Raceway in Phoenix.

“We just know we have to be better,” said Truex, who advanced to the Round of 8 with a nail-biting eight-point margin in the Round of 12. “Cole (crew chief, Cole Pearn) knows it and Jazzy (engineer Jeff Curtis) knows it. The playoffs haven’t been good to us this year and we’ve really battled a lot of adversity, especially in the second round.”

Truex enjoyed a strong first round (Round of 16) finishing third and leading the most laps in the first two races at Las Vegas and Richmond. He was in a position to win the third race in Charlotte, but got taken out while in the lead with a short distance to the checkered flag.

But the second round was not kind to Truex. He had a potential top five at Dover but got caught up in a final-lap multicar wreck that relegated him to a 15th-place finish. Talladega was miserable with handling problems as he settled for a 23rd-place result. The Furniture Row Racing driver showed his grit in the Kansas pressure-cooker race, roaring back from a sluggish start to finish fifth.

“I thought we could have won the first three playoff races and then the last three haven’t been as good as it needed to be,” Truex noted. “Hopefully the next three we’ll step it back up. We had a lot of things work against us in the second round. With that said, to be able to move on with all those troubles I feel like we’re fortunate. We need to fix those problems, make our own luck and figure out how to run better.”

Truex understands there will be no margin of error if he wants to be one of the four drivers going to Homestead-Miami Speedway and have the opportunity to defend his NASCAR Cup Series championship.

But for the present, Truex is only focused on Sunday’s race in Martinsville and having the right package in his No. 78 5-hour ENERGY/Bass Pro Shops Camry. Based on his recent performances at the .526-mile paper clip-shaped oval, he welcomes the challenge.

“I feel good about Martinsville,” Truex stated. “It’s one of those tracks where we’ve been getting better and better. We’ve been knocking at the door of having a shot at winning there. We ran really well in the spring race (finished fourth) and finished second in the fall last year.

“Martinsville is a place where experience really comes into play and I feel like we’ve been chipping away at it since we’ve been together as a group. So we’ll go there and try our best and see what happens.”

With the points being reset for the Round of 8, Truex is ranked third and will start with a 23-point cushion over the fifth-place position.

“Certainly, resetting the points is going to be good for us with the troubles we had in the second round,” Truex explained. “It will give us a nice little cushion to get going again, and hopefully, just be able to execute, run up front and not have the bad luck we’ve had so far.”