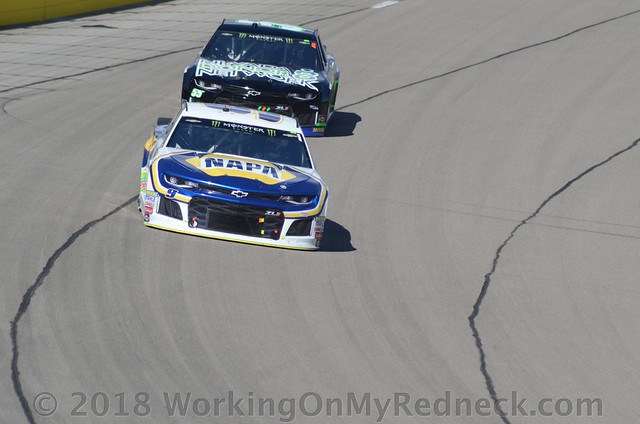 It took 99 races for Chase Elliott to get his first Monster Energy NASCAR Cup Series victory.

Ten events later, the son of NASCAR Hall of Famer Bill Elliott has three wins, the latest coming at Kansas Speedway in the Sunday’s Round of 12 elimination race in the series Playoffs.

Elliott took charge in the Hollywood Casino 400 when Kevin Harvick was ticketed with a pit road speeding violation on his last green-flag pit stop on Lap 214 of 267. After inheriting the lead when Brad Keselowski came to pit road on Lap 224, Elliott stayed out front the rest of the way.

Over the closing laps, runner-up Kyle Busch chopped Elliott’s three-second lead to .300 seconds but could get no closer.

Elliott crossed the finish line .903 seconds ahead of Busch, as Kyle Larson—needing a victory to advance to the Round of 8—came up short with a desperation charge that carried him to a third-place finish.

The victory was Elliott’s second in three weeks, as the driver of the No. 9 Hendrick Motorsports Chevrolet made a statement entering the next round of the Playoffs. To Elliott, the “overnight” success wasn’t a surprise.

“I thought last year we had a pretty solid run at it and didn’t win any, obviously, but had some really good runs,” Elliott said. “Just so proud of my race team and the pit stops we had today. (Crew chief) Alan (Gustafson) made some great calls.

“We just can’t get complacent. This is a huge time of year. We have a lot of work to do and a long way to go.”

“I got really tight that last run, and especially the second half of the run, he was catching me, and he was making a lot of time right against the wall, and I was just afraid to get up there and put it in the fence and really ruin it,” Elliott said.

“I felt comfortable running down just slightly. I could move up a little bit to make some time when I had to; I just really didn’t want to do it if I didn’t absolutely have to.”

Fortunately for Elliott, Busch’s effort stalled out in the final five laps.

“We had a great race there at the end,” Busch said. “We were trying to chase down Chase. We were close. Got kind of there, then just the car died out, didn’t have any more to go. I was afraid that was going to happen. Good day for us.”

Elliott and Aric Almirola, who finished 10th on Sunday, already were guaranteed berths in the Round of 8, thanks to respective wins at Dover and Talladega. Harvick, who came home 12th after leading 76 laps, locked himself into the next round with a second-place result in Stage 1.

Pole winner Joey Logano led a race-high 100 laps and cemented his position in the next round with a Stage 1 victory and an eighth-place finish. Kyle Busch and reigning series champion Martin Truex Jr. (fifth on Sunday) are still alive in the championship battle.

So, too, are Clint Bowyer and Kurt Busch, as all four Stewart-Haas Racing drivers advanced to the Round of 8. Bowyer finished 14th after the nose of his No. 14 Ford sustained damage on restart from contact with Jimmie Johnson’s Chevrolet.

Kurt Busch made the next round despite a tire violation on pit road that cost him a lap. Busch finished 18th but ended the day six points ahead of Ryan Blaney for the last spot in the Round of 8. Ryan Blaney was third in Stage 1 and second in Stage 2 but slapped the wall on Lap 204, dropped to seventh at the checkers and finished six points behind Kurt Busch for the final berth.

“I’m really happy,” Kurt Busch said. “It’s exciting for us. It’s our goal to win the championship. We’re an elite eight team when we started Daytona and here we are—we did it. It was a rough day in the pits and on the track but we had enough points from the (Charlotte) Roval and our stage races.

“It was a rough day, and we need to put it quickly behind us. We’re back on even ground. We’re in the top eight, and Martinsville (next Sunday) is the path to the championship down in Homestead.”

Eliminated with Blaney were Larson, sixth-place finisher Brad Keselowski and ninth-place Alex Bowman, whose only path to the Round of 8 would have been a Kansas victory.

Erik Jones, who was eliminated from the Playoffs in the first round, scored his second fourth-place result in the past three races.

Check out the results from the Hollywood Casino 400 at Kansas.