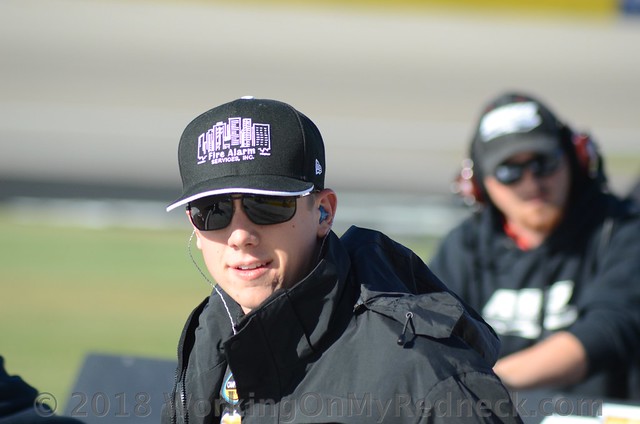 John Hunter Nemechek grabbed his first NASCAR Xfinity Series victory in a race that threw the championship battle into chaos.

Pulling away with three laps after the final restart on Lap 169 of 200, Nemechek took the checkered flag 5.200 seconds ahead of Daniel Hemric to win the Kansas Lottery 300 at Kansas Speedway, the venue where his father, Joe Nemechek, won his final Monster Energy NASCAR Cup Series race in 2004.

Though Nemechek fell far behind Hemric after sliding through his pit box during a green-flag stop on Lap 150, he caught a break when Vinnie Miller stalled near the exit from pit road to cause the seventh and final caution on Lap 164.

Nemechek powered his No. 42 Chip Ganassi Racing Chevrolet from sixth place on the restart and passed Hemric for good after a side-by-side battle on Lap 171.

“When that caution came, I knew we had a chance,” Nemechek said. “Luckily, Daniel and I raced each other hard and clean all day. We got the track position, and this thing was on rails today. I feel like we’ve been contending for wins all year. We just haven’t pulled through.

“To check the first one off—that’s the hardest one to get. Hopefully, we can go on. We’re racing for the owners’ championship at Homestead.”

Nearly 200 laps before Nemechek crossed the finish line, however, a shocking, monumental crash jolted the hopes of four title contenders and turned the Playoff standings upside-down.

Third-place starter Justin Allgaier, second in points, got loose in the second corner on Lap 1 and clipped the No. 20 Toyota of series leader Christopher Bell, turning Bell’s car into the outside wall. Allgaier’s No. 7 Chevrolet bounced off Bell’s Camry like a pinball and collected the No. 22 Ford of Playoff driver Austin Cindric.

Allgaier and Cindric were unable to continue. Bell’s team tried in vain to repair his Toyota, but Bell retired after completing two laps. Also damaged in the first-lap incident was the No. 00 Ford of Cole Custer, which fell 10 laps down while his team tried to fix the power steering.

Custer earned a hard-fought 26th-place finish but fell to seventh in the Playoff standings.

“I was the cause of the incident, unfortunately,” a rueful Allgaier said after exiting the infield care center. “That one’s on me. I’m super disappointed for everybody involved.

“Not only did we wreck our day but a lot of the other competitors. Hate it for those guys. Hopefully, we can get to Texas next week and rebound from it.”

The wreck wiped out the Playoff point advantage Bell and Allgaier held at the start of the Round of 8. Bell, Allgaier and Cindric finished 37th, 38th and 39th, respectively.

“I didn’t really see much of anything,” Bell said of the accident. “Just kind of driving around there. Just heartbroken. This is one of my favorite race tracks we go to, and especially after the run I had last year (his first Xfinity win), this is the race that I was looking forward to whenever we started the year back in February.”

Bell nevertheless was well aware of the benefit his six series wins have given him, having entered the round with 44 Playoff points, five more than Allgaier.

“That’s the beauty of this format,” Bell said. “NASCAR’s done such a great job at giving us something to race for during the regular season. We’ve done our job winning six races this year, so we’ve accumulated some bonus points, so hopefully, that can carry us through this bad stretch here and maybe we can find ourselves in Victory Lane later on in this round.

“If not, hopefully, the bonus points will get us there.”

Cindric, who came to Kansas in eighth place and leaves in the same position, didn’t have the luxury of a points cushion.

“I’m thankful to still be in the Playoffs and still have a shot,” said Cindric. “I felt like we had a shot to win today. We’ll move on, have a week to think about it, go to Texas. Looks like we’re going to have to win (to advance).”

Hemric, who led 128 laps, leaves Kansas as the series leader, 23 points above the cut line. Allgaier dropped below the Playoff cut line behind Matt Tifft in fifth. Bell stayed one point to the good Tifft, who finished sixth on Saturday as one of eight drivers on the lead lap.

Elliott Sadler ran third to hold second in the standings, very much alive in his quest to win a first championship in his last season of full-time competition. Tyler Reddick, Sadler’s JR Motorsports teammate, came home fourth and is third in the series standings.

Shane Lee finished a career-best fourth in his 10th start of the season.

Check out the results of the Kansas Lottery 300.