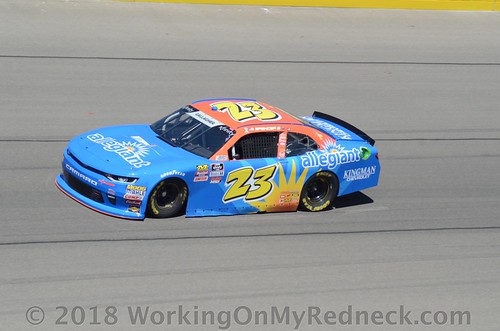 The announcement was made on Friday afternoon prior to Xfinity Series practice at Kansas Speedway. Gallagher said he will move into a managerial role with the organization beginning with the 2019 season.

Gallagher, 28, is the son of GMS Racing team owner Maurice Gallagher who also owns Allegiant Airlines, the primary sponsor for the Las Vegas, Nev. native throughout most of his career.

He joined the ARCA Racing Series in 2011 where he made 51 starts winning just one race at Kansas Speedway in Oct. 2014. From ARCA, he joined the Truck Series full-time in 2015 for two seasons before advancing to the Xfinity Series in 2017.

Gallagher won his first Xfinity Series race at Talladega (Ala.) Superspeedway this past April as part of NASCAR’s Dash4Cash competition, but his win was overshadowed four days later when NASCAR suspended the driver for violating the sanctioning body’s substance abuse policy.

Over the past year, Gallagher has also assumed a managerial role for GMS Racing often speaking at press conferences as a representative of the team.

“Regarding the announcement of Spencer Gallagher’s retirement earlier today at Kansas Speedway, all of us at GMS Racing wish Spencer the best in his future endeavors. We look forward to what the future holds for this organization and we will continue to work to build our Xfinity Series program into a championship caliber team like our trucks.” – Mike Beam President of GMS Racing