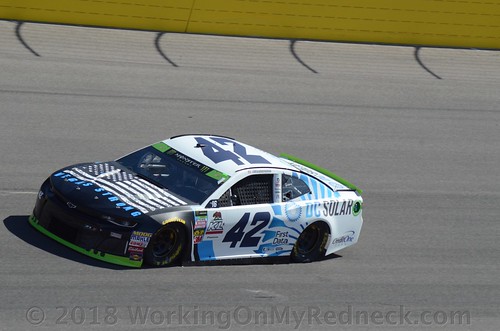 It is a situation that seemingly should make a driver feel unease, rankle their nerves and bring about second-guessing on how they ended up being on the brink of elimination from the Monster Energy NASCAR Cup Series Playoffs barring a win in this weekend’s elimination race.

And yet Kyle Larson isn’t experiencing any of these feelings heading into Sunday’s Hollywood Casino 400 at Kansas Speedway, the Playoff’s Round of 12 finale that will see four drivers knocked out of the postseason. In fact, Larson is almost relishing the prospect that he and his Chip Ganassi Racing team can now compete without concern and focus solely on doing whatever possible to reach Victory Lane.

“There is no pressure, really,” Larson said. “There is pressure to not make mistakes and cost yourself the spot where you are [trying to make] the next round — you’re so worried about not making a mistake. Where in our position, we know what we have to do. We can be aggressive. I can run hard all race long. I can just race with little care and our team can make aggressive pit calls.”

Larson is 36-points below the final provisional transfer spot entering the weekend, a position presently occupied by Martin Truex Jr., both the defending race winner and series champion. Although Larson could theoretically amass enough points Sunday to transfer to the Round of 8, his deficit is such it will be difficult to overcome, essentially creating a scenario where anything short of a win means his championship hopes are over for the season.

That Larson finds himself on the wrong side of the line is because of good, though not great, finishes in the past two races — a 12th in the second round opener at Dover International Speedway and an 11th last week at Talladega Superspeedway — combined with a 10-point penalty for a rules violation at Talladega. Even without the penalty, he says his mindset would be no different this weekend. It’s all about winning.

“Obviously, a 10-point penalty doesn’t help, but I felt like with even being 26-points back, we were going to probably have to go into this week and get a win to make it into the next round,” Larson said.

Further complicating matters was a crash during practice on Friday that saw Larson get loose in Turn 2 and pancake the outside wall. The contact was substantial enough Chip Ganassi Racing had little recourse but to pull out a backup Chevrolet Camaro ZL1 for Larson, who regardless of where he qualifies will now have to start at the rear of the field on Sunday.

“I’m sure the backup car will be fine,” he said. “I’ve been in a backup car before here and went fast. Dig deep, work hard and see where we’ll be Sunday.”

The predicament Larson is in is not insurmountable. Drivers rising up to score a victory to stave off elimination is not an unusual occurrence since NASCAR instituted the elimination-based Playoff format prior to the 2014 season. Kevin Harvick has come through on multiple occasions, while Brad Keselowski pulled off a rousing win at Talladega in 2014.

Working in Larson’s favor is that Kansas presents an ideal track for him to get that needed win. He excels on multi-grooved, intermediate-sized speedways, and in the spring race here had one of the fastest cars, leading 101 laps and winning the second stage despite starting last in the 38-car field. His bid for victory was dealt a blow, however, when Ryan Blaney collided into the No. 42 car during a late restart. Larson still overcomes the considerable damage to net a fourth-place finish.

“At Chip Ganassi Racing, the mile-and-a-half tracks have been our best tracks,” Larson said. “I know we’ll be fast and lead laps, and we just have to capitalize on that and win the race.”