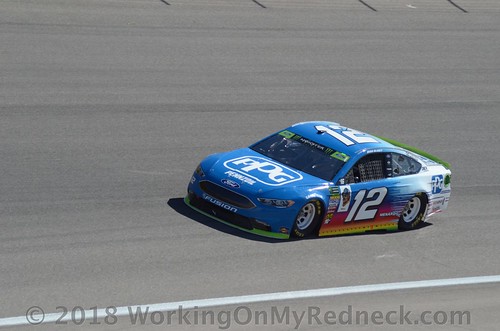 More often, the expression “what a difference a week makes” is considered trite and overused. But in the case of Team Penske’s Monster Energy NASCAR Cup Series title hopes, it is an apt and viable expression for the championship team.

In a matter of minutes, late in Sunday’s race, at Talladega Superspeedway, two of the Penske team’s Playoff winning drivers – Brad Keselowski and Ryan Blaney – dropped out of the top-eight in the Playoff rankings and find themselves in urgent need for a change in fortune as the series heads to Kansas Speedway for Sunday’s Hollywood Casino 400 – the final race in the second round of the Playoffs.

The two Ford drivers had been running up front – strong and trouble free – all afternoon at Talladega, but both ran out of fuel by the final restart in overtime. Keselowski finished 27th and Blaney, 29th.

They, along with teammate Joey Logano, had been considered good bets to advance through this round of Playoff competition. Instead, they find themselves in a perilous position heading into Sunday’s race.

Keselowski – a three-time race winner this season and a winner in the opening Playoff race at Las Vegas – is now 18-points behind eighth place, Martin Truex Jr. with only the top eight drivers advancing to the next round of the Playoffs.

Blaney, also a Playoff race winner, taking the inaugural trophy at the Charlotte Road Course three weeks ago, falls to 10th in the standings, 22-points behind Truex.

“Really disappointing way to end our day,” Blaney acknowledged after the Talladega race. “We didn’t have the fastest car today, but we were in a good spot before the caution came out.

“We have a lot of work to do to keep our championship hopes alive, but Kansas has been a good track for us in the past.”

A win or an exceptionally strong showing will be necessary this weekend. And eighth place Truex not only has a reasonable points advantage, but he has also won two of the last three Kansas races. And he finished runner-up this Spring to current championship points leader Kevin Harvick.

Keselowski, 34, is a former Kansas race winner, taking the trophy in the spring of 2011. The driver of the No. 2 Team Penske Ford has two top-10s in the last five races, including a runner-up in the spring of 2017. He’s led only 22 laps in that time frame, however, and didn’t lead any laps this Spring en route to a 13th-place showing.

Blaney, 24, has four top-10 finishes in seven career starts at Kansas and led 54 laps this Spring before getting collected in a crash.  He was third in this race last Fall.

More worrisome than Keselowski’s and Blaney’s situations are Kyle Larson and Alex Bowman’s position in the standings. The two Chevrolet drivers essentially find themselves in a must-win situation at Kansas. Larson, who drives the No. 42 Chip Ganassi Racing Chevrolet, is 26-points behind Truex in the cutoff position. And Bowman, who drives the No. 88 Hendrick Motorsports Chevrolet, is 68-points behind.

Larson, a four-time winner in 2017, is still looking for his first victory of this season. He has top-10 finishes in two of the last three races at Kansas and led a race-best 101 laps this Spring only to finish fourth. Last year, Larson suffered a heartbreaking outcome at Kansas, retiring early with an engine problem that ultimately eliminated the heavy championship favorite from the Playoffs.

Bowman scored his career-best outing at Kansas in this race last year – a seventh-place effort filling in for then-injured Dale Earnhardt Jr.