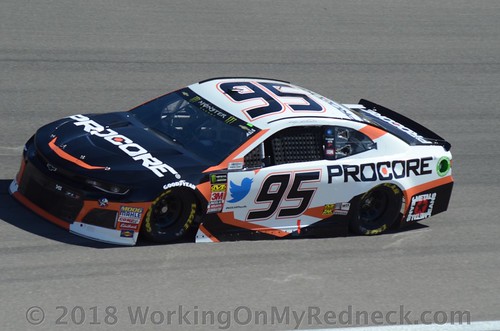 Regan Smith: “Kansas is a track that I thoroughly enjoy.  It’s wide, it’s fast, and there’s lots of different grooves that you can run.  I love when it’s hot and slick and you can run along the wall, although it’s probably not going to be as hot this weekend as we typically see there like we would for the May race based on the weather forecast.  With the lack of downforce on the cars, I still think that we’ll be able to run up along the wall though.  Talladega was a good finish for the team in the fact that it gave us some good momentum being able to get a top-10 finish.  It lets us continue to build on that, and ever since I’ve been in the No. 95, I’ve felt like the bigger tracks have been a little more of our strong suit, so I’m excited about getting to Kansas this weekend.”

Jon Leonard: “We didn’t run up to our expectations at Kansas earlier this year back in May.  Looking ahead to this weekend, we’re taking a lot of what we’ve recently learned this year and implemented at the past few 1.5-mile and larger tracks which we’ve seen some success on.  The cars change so fast, and set-up theories develop through the season, that we’re actually quite a bit different than what we took to Kansas for the last race.  Kansas is so flat and smooth, that keeping the car down and into the track at all times, is the key to speed.  It’s one of those places where aero-balance changes a lot throughout the course of a run, so you’re fighting that as well as fuel burn, tire fall-off, traffic, etc.  We typically fight loose going into Turn 1 with the sweeping entry and tight off of Turn 2 where the exit tightens up, much like Texas.  We’re focusing on those areas and hopefully we’ll be able to find some speed with the TWD Chevrolet this weekend.  Kansas doesn’t have a ton of tire fall-off, it’s somewhere in the middle of the road of most tracks, so pit strategy usually comes into play.  I’m sure we’ll have some opportunities to exploit that and then be able to work towards another good finish.”

F.T. “Tommy” Williams, Jr. entered the construction industry in 1954 – it was at that time that he founded a plaster company doing projects throughout the state of Texas. As the commercial building industry evolved more heavily from plaster to drywall, it was at that time that Tommy Williams Drywall Co., Inc. was formed. Since the early 1960’s we have been providing a full line of commercial drywall services to clients across the state of Texas. In 1995 the business was sold to Tom Williams, who currently serves as President of the company. For more information about the company, visitwww.tommywilliamsdrywall.com.