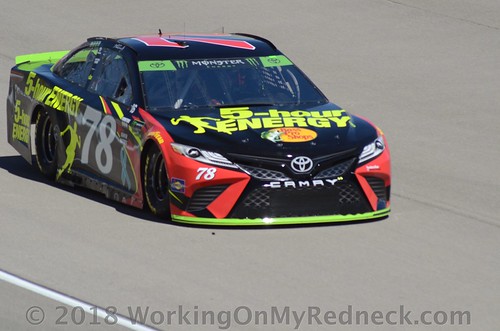 When Sunday’s NASCAR Cup Series race at Talladega Superspeedway went into overtime it was looking like Martin Truex Jr. would go into next week’s final playoff race in the Round of 12 points below the eighth-place transfer spot.

But when the dust cleared following a final-lap multicar wreck in overtime at the 2.66-mile oval, Truex’s playoff point standing quickly went from a negative to a positive.

Though his No. 78 Bass Pro Shops/5-hour ENERGY Toyota got clipped in the final-lap wreck, Truex was able to drive his car to the checkered flag with a 23rd-place result. The finish gave Truex an 18-point playoff cushion heading to Kansas Speedway next Sunday for the third and final race in the Round of 12.

Truex, who had a 36-point playoff advantage entering Talladega, had car issues almost from the get go. And since he felt the car’s handling would not allow him to run with the lead pack, he played it safe and hung in the back at the multi-accident prone track.

When asked in post-race interviews if he knew the cause of the handling issues, Truex said, “No. It didn’t really matter what we did to the car. It didn’t go away. We tried a lot of stuff. It was tough to drive. It couldn’t even go straight. I could run hard for two or three laps. As soon as the tires got some air pressure, I was just hanging on. The longer the runs were, the worse it got.

“There was no chance of me just getting up there and racing. I wanted to. Luckily, we were able to get some tires there in the end. I could go for about three laps. I felt good going to the green-white-checkered. They wrecked in front of us and we barely made it through. As soon as we got through there, I was able to salvage something.”

While Talladega has never been one of Truex’s best tracks, the next race at Kansas Speedway has been one of his best venues.  In his last three races at the 1.5-mile Kansas track Truex has two victories and a runner-up.

“Yeah. I think that’s a good place (Kansas) for us even if we had to win,” Truex said. “I am not saying we’re going to go there and win. But anytime we can go to any of those (1.5-mile) tracks, I feel like we have a shot. It’s racing. A lot can happen as we saw today. We’ll give it everything we got and bring a great car to Kansas. We’ll try to get the checkered flag.”

The race winner and advancing to the Round of 8 was Aric Almirola. Rounding out the top 10 were: Clint Bowyer, Ricky Stenhouse Jr., Denny Hamlin, Joey Logano, AJ Allmendinger, Jimmie Johnson, Erik Jones, Paul Menard and Regan Smith. Only three of the top-10 finishers were playoff contenders.

The race had eight cautions for 32 laps and there were 15 lead changes among 11 drivers.