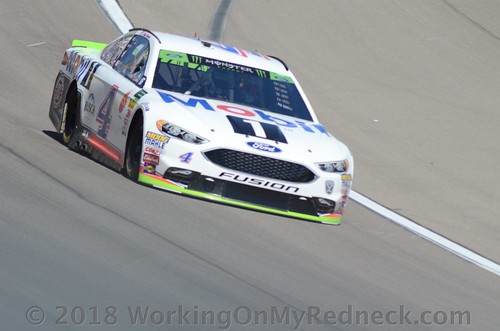 Point Standing: 3rd with 3,128 points, 63 points ahead of top-eight cutoff

● Started third but lined up fourth behind his Stewart-Haas Racing (SHR) teammates after taking the green flag.

● Took advantage of caution and pitted his No. 4 Jimmy John’s Ford Fusion for fuel only on lap 12.

● Was third for the lap-15 restart, but he grabbed third place from teammate Aric Almirola after one lap.

● Pitted for four tires and fuel at the conclusion of the stage.

● Took advantage of caution to pit for fuel only on lap 64. Came off pit road in first place.

● Pitted for four tires and fuel at the conclusion of the stage.

● Caution period beginning on lap 136 allowed Harvick to pit for right-side tires and fuel on lap 138. Came onto pit road in third place and left in third for lap-142 restart.

● All four SHR drivers were able to line up on the inside for the restart, with Harvick rising to second behind leader and teammate Kurt Busch.

● Harvick kept his Jimmy John’s Ford out on the track and in second place when the caution flag waved on lap 159. Crew chief Rodney Childers said, “Keep saving fuel.”

● On the lap-165 restart, Harvick dropped one spot back to third as teammate Clint Bowyer fell in line ahead of him to take second.

● The field remained single file until a caution on lap 187 forced overtime.

● As the field came to the green flag for the restart, Harvick peeled off the track and pitted for fuel.

● The stop dropped him to the middle of the field, and the race finished under green with Harvick in 28th.

“I’m just really proud of everybody at Stewart-Haas Racing. Mine sputtered there on the fuel pressure and it dropped down in the red, and they did the right thing of coming in and pitting and not taking a chance. You just need to put yourself in a position to where you’re good for next week, and I’m just glad that one of our cars won and happy for Aric (Almirola). I want to thank everybody from the engine department at Roush Yates for all the work and effort that they put into everything that goes on the racetrack. This is all about cars and people and engines and everything that goes, and when you can have a group of guys that work together like we did today, you can control the situation in the race a lot more than just battling it out amongst each other.”

● Harvick led twice for 46 laps to increase his laps-led total at Talladega to 259.

● Almirola won the 1000Bulbs.com 500 to score his second career Monster Energy NASCAR Cup Series victory, his first of the season and his first at Talladega. His margin of victory over second-place Clint Bowyer was .105 of a second.

● There were eight caution periods for a total of 32 laps.

Playoff Standings: (with one race to go before Round of 8):

The next event on the Monster Energy NASCAR Cup Series schedule is the Hollywood Casino 400 on Sunday, Oct. 21 at Kansas Speedway in Kansas City.