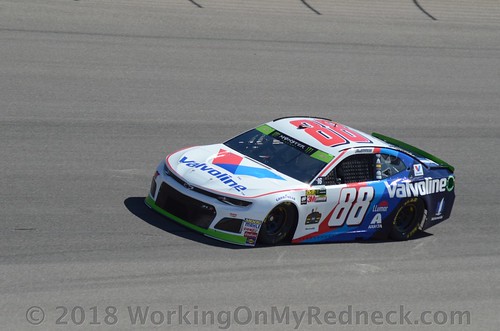 Though his No. 88 Chevrolet team will be largely unaffected by the upcoming personnel changes at Hendrick Motorsports announced Wednesday, he does think the moves will bring a new dynamic to the organization.

The major news from Hendrick was the impending breakup of the driver Jimmie Johnson and crew chief Chad Knaus, who have accumulated a record-tying seven Monster Energy Cup Series championship in 17 seasons together.

Knaus will move to the No. 24 Chevy of William Byron, while Kevin Meendering will move from JR Motorsports and the NASCAR Xfinity Series to call the shots from Johnson’s pit box. Byron’s current crew chief, Darian Grubb, will take an executive role as technical director.

But will those changes have a noticeable effect on Bowman’s No. 88 team?

“I would say a little bit, in that Darian is moving to a different position and Kevin is coming on board,” Bowman told the NASCAR Wire Service on Saturday morning at Talladega. “I know Kevin a little bit from when I was at JR Motorsports, and just kind of working closer with him will be neat.

“The four of us work pretty closely together, the four teams do. Some new faces or a new face there, Chad moving over to a different car and all that. It will be a little different, but not really much different.  It won’t affect the No. 88 team. All our people are going to stay the same and all that.

“I think it’s an interesting move, for sure. I’m excited to see how it plays out. I’m excited for Jimmie and for William and for Chad and everybody involved. It’s going to be pretty cool to watch.”