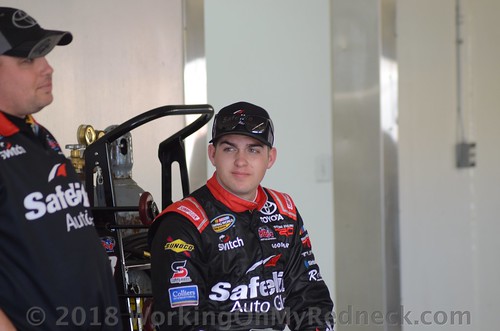 For a while, at least, Noah Gragson thought he might have the services of Kevin Meendering as his crew chief next year.

Gragson has signed with JR Motorsports, where he’ll replace NASCAR Xfinity Series championship contender Elliott Sadler, who is retiring from full-time racing at the end of the season. Meendering is Sadler’s crew chief.

But Hendrick Motorsports team owner Rick Hendrick had other plans for Meendering, who will replace Chad Knaus as crew chief for the No. 48 Monster Energy NASCAR Cup Series team of seven-time champion Jimmie Johnson next year.

That leaves Gragson with a major unanswered question!

“I don’t know who my crew chief will be,” said Gragson, who is battling for the NASCAR Camping World Championship in the No. 18 Kyle Busch Motorsports Toyota this season. “I was reading on Twitter yesterday, and I saw Meendering, who I think that is the crew chief for the No. 1 car (Sadler).

“I started to put things together, and I thought that was the guy who is supposed to be my crew chief. Why is he going to be the crew chief of Jimmie Johnson next year? I don’t know who it’s going to be. I’m really focused on competing this weekend and finishing this year out strong with my Kyle Busch team.”