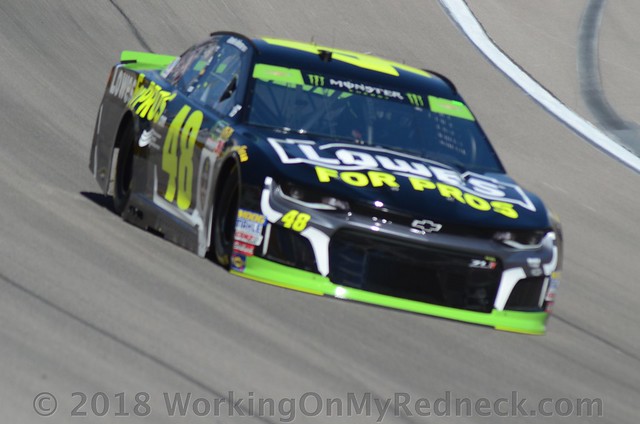 After last week’s close call at the Charlotte Motor Speedway Road Course, Jimmie Johnson was a logical choice to contend for a victory at Dover International Speedway, where he has accumulated 11 of his 83 career victories.

But when the green flag waved at the Monster Mile, Johnson’s No. 48 Hendrick Motorsports Chevrolet wasn’t even on the track.

With what was eventually diagnosed as a lower ball joint failure, Johnson took his car to the garage for repairs and didn’t reappear on the concrete until the Gander Outdoors 400 was 10 laps old. After a subsequent pit road penalty, he finished 36th, 17 laps down.

The mechanical failure was a continuation of the ill fortune the seven-time champion had suffered at Charlotte, where his attempted pass of martin Truex Jr. on the last lap ended in an accident that knocked Johnson out of the Monster Energy NASCAR Cup Series Playoffs on a tiebreaker.

Truex’s crew chief, Cole Pearn, suggested that Johnson could atone for the Charlotte wreck by giving Truex’s crew road bikes, so Johnson went shopping, bought a trove of girls’ bicycles and placed them on the No. 78 hauler before the crew arrived.  Pearn added to the humor with a note giving the bikes away and noting that these bikes may “wheel hop”!

But the frivolity quickly turned to frustration when Johnson failed to start Sunday’s race.