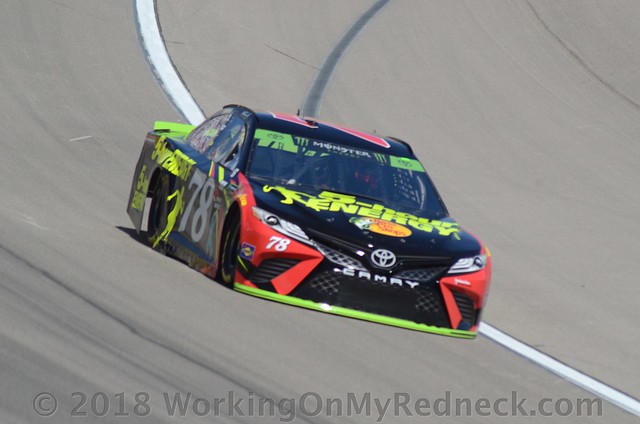 Dover International Speedway, site of Sunday’s opening playoff race in the Round of 12, has been a sweet spot venue for Martin Truex Jr., who regards the 1-mile oval as his first home track.

The Furniture Row Racing driver has had his share of success at Dover’s all-concrete track known as the Monster Mile, which is located 130 miles from Truex’s hometown of Mayetta, N.J.

Dover is one of seven tracks where Truex has scored multiple wins. His first career NASCAR Cup Series victory came at Dover in June 2007. He also won a playoff race at Dover in October 2016.

“No question Dover has been a good track for us,” said Truex, who will drive the No. 78 5-hour ENERGY/Bass Pro Shops Toyota in Sunday’s race. “I really feel comfortable driving there. It’s been one of my favorite tracks.”

Truex is cautiously optimistic heading into the second playoff round as he continues the battle to successfully defend his NASCAR Cup Series championship.

“Though we enter Dover with a modest cushion of playoff bonus points, we are very well aware that those points can evaporate in a hurry,” Truex noted. “We need to remain consistent with solid finishes and try to get as many stage points as possible.

“We also like Kansas Speedway, which is the third and final race in the Round of 12. Had plenty of success there too. Talladega (next race after Dover) is a wild card and we haven’t had much luck there so we need to make sure we shine at Dover and Kansas to make the next round on our own and not worry about what other drivers are doing.”

Truex is ranked third entering Dover with 3038 points. All drivers start the Round of 12 with 3000 points plus playoff bonus points earned throughout the season.

Truex’s 38 playoff bonus points could easily be 43 had he not been taken out near the finish line while leading Sunday’s road race at Charlotte Motor Speedway.  He would have picked up five additional bonus points as the race winner.

“You know, we had the performance to win all three of the races in the first round,” said Truex, who had finishes of third in the first two races at Las Vegas and Richmond. “Came so close to a win at Charlotte, but got spun out just before the finish line. Hopefully, we’ll get that win when we really need it.”