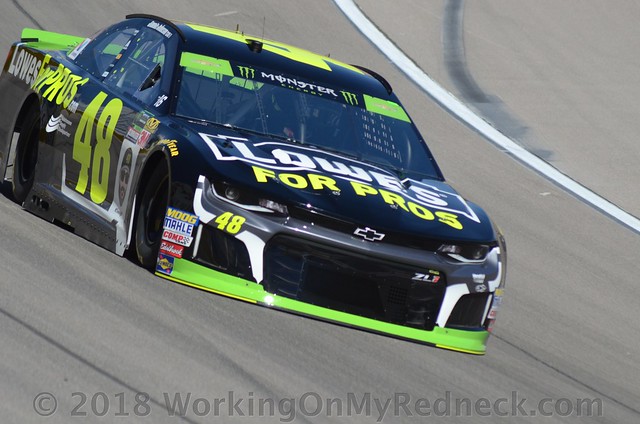 With more than just a split second to think about it, seven-time Monster Energy NASCAR Cup Series champion Jimmie Johnson might have made a different choice.

But the Hendrick Motorsports veteran had a drought-breaking victory in his sights and confidence in his No. 48 Chevrolet Camaro ZL1, and that proved an unfortunate combination—one that cost him a spot in the second round of the Monster Energy NASCAR Cup Series Playoffs.

On the last lap of Sunday’s Bank of America ROVAL 400 at the Charlotte Motor Speedway Road course, Martin Truex Jr. was leading with Johnson in close pursuit. Johnson closed up to Truex’s rear bumper through Turns 13 and 14 (Turns 3 and 4 on the NASCAR oval) and took the inside line into the frontstretch chicane.

But Johnson overdrove the corner, spun and backed into Truex’s No. 78 Furniture Row Racing Toyota Camry between Turns 16 and 17, knocking Truex’s car toward the outside wall in the tri-oval. Ryan Blaney charged between the two wrecked cars and won the race.

Johnson rolled across the finish line in eighth and finished the event in a three-way tie for the two final berths in the second round of the Playoffs. But he lost a tiebreaker to Kyle Larson and Aric Almirola based on best finish in the first round and consequently lost a chance to compete for a series-leading eighth title.

Entering the race, Johnson had suffered through a career-long 51-race winless streak, and the long-awaited victory was there for the taking.

“Yeah, I had been so good into that final braking zone, I really felt like I could put some pressure on (Truex) and take a shot at it,” Johnson said. “I got out of the chicane on the back straightaway better than he did and put some pressure on him. Got him loose and off the bottom (on the oval), and I thought that was my chance.

“Unfortunately, down here through the bumps coming into that braking zone, I just locked up the rears and couldn’t control my car and spun. I didn’t think that I initially got into him, but clearly I did and spun him around.  Took myself out of a shot at the championship and obviously affected their day, which I feel bad about.

“I wish I wouldn’t have been so focused on a race win, and I could have transferred and kept my championship hopes alive, but we had such a good car and just one of those split-second decisions to race for the win instead of for the points—and it bit me.”