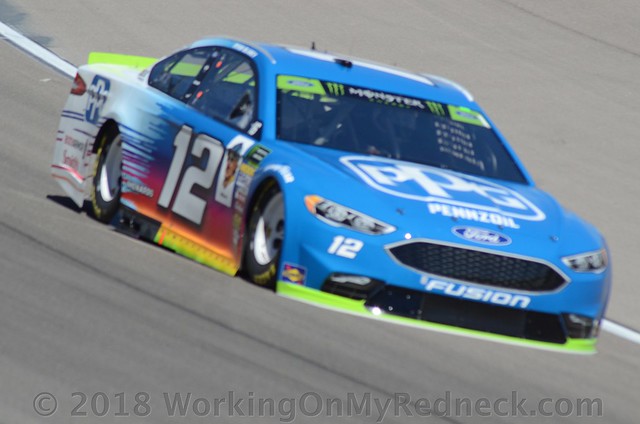 In a race that was as wild as advertised in the closing laps, Ryan Blaney sped past crashing Jimmie Johnson and Martin Truex Jr. in the final corner to win Sunday’s inaugural Bank of America ROVAL 400 at the Charlotte Motor Speedway Road Course.

With his first Monster Energy NASCAR Cup Series victory of the season and the second of his career, Blaney advanced to Round of 12 in the Playoffs.

Johnson wasn’t as lucky. The seven-time series champion was pressuring Truex on the final lap and powered his No. 48 Hendrick Motorsports Chevrolet Camaro ZL1 to the inside of Truex’s No. 78 Furniture Row Racing Toyota Camry off the banking of Turn 15 coming into the frontstretch chicane.

Johnson spun and collected Truex as he slid across the asphalt between Turns 16 and 17, knocking Truex’s Toyota toward the outside wall in the tri-oval. Blaney drove his No. 12 Team Penske Ford Fusion between the two wrecked cars and crossed the finish line .792 seconds ahead of runner-up Jamie McMurray.

Because he had blown the chicane, Johnson stopped on the frontstretch as mandated by NASCAR before continuing across the finish line. He finished eighth and ended the event tied for 11th in the Playoff standings with Aric Almirola and Kyle Larson, who completed the final lap in a car that had been all but destroyed in a Turn 1 wreck after a restart on Lap 104 of 109.

Almirola and Larson got the final two berths into the Round of 12 on a tiebreaker based on the best finish in the current round. Larson was second at Las Vegas, and Almirola took fifth place at Richmond. Johnson’s best result was the eighth at Charlotte, leaving him on the outside with Austin Dillon, Denny Hamlin, and Erik Jones, who also were eliminated from the Monster Energy Series Playoffs in Sunday’s cutoff race.

“Tough weekend, just kind of avoided some stuff,” Blaney said after he climbed from his car. “You hate to see two guys get into it there and take out two of the best cars all day. But that’s racing sometimes.

Truex, who led into the final chicane, was understandably disappointed with his 14th-place result.

“Last corner, desperation behind us, that’s what you get,” said Truex, a four-time winner this season. “I gave him (Johnson) the inside lane, and he had the run through (NASCAR Turn 4), and I was real tight down there. I let him have the inside going down inside coming out of 4 there to the chicane.

“He just over-drove it and was never going to make it and he used me as brakes and turned us both around. It sucks. We could have raced side-by-side off the last corner for a win, and that would have been cool. The fans would have been digging it, but instead, we finished 14th and he’s locked out of the Playoffs. I guess that’s what he gets.”

Joining Blaney, Larson, and Almirola in Round of 12 of the Playoffs are Brad Keselowski (Las Vegas winner), Kyle Busch (Richmond winner), Truex (locked in after Richmond) and Kevin Harvick (who qualified for the next round when he took the green flag on Sunday).

Check out the results of the Bank of America Roval at Charlotte.