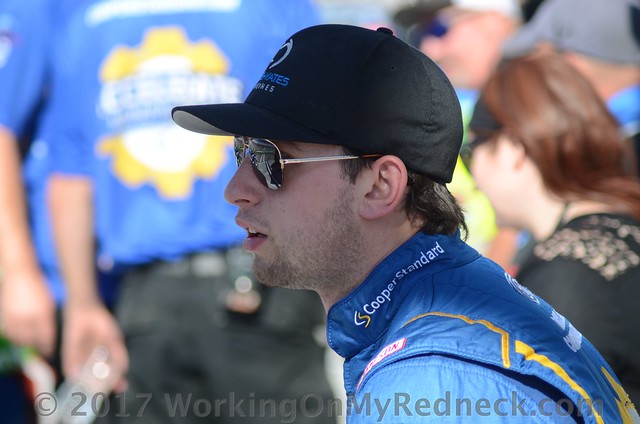 Chase Briscoe made the most of pit strategy that put him out front during Saturday’s inaugural NASCAR Xfinity Series race at the Charlotte Motor Speedway Road Course.

Leading the last 24 of 55 laps in the Drive for the Cure 200 at the challenging 2.28-mile, 17-turn road course—thanks to a pit stop on Lap 26, before the end of Stage 2—Briscoe held off Justin Marks after the last restart on Lap 45 and took the checkered flag 1.478 seconds ahead of Marks’ No. 42 Chip Ganassi Racing Chevrolet.

Driving the No. 98 Ford fielded by Biagi DenBeste Racing in collaboration with Stewart-Haas Racing, Briscoe claimed his first victory in the series. Neither Briscoe nor Marks are Playoff contenders, given that neither is running a full Xfinity Series season.

“This is unreal,” an elated Briscoe said after the race. “I was four seconds off in practice, and my guys stuck behind me and kept working with me. It’s just an honor and privilege to drive a race car and to do it for my hero, (Stewart-Haas co-owner) Tony Stewart, and get a win.

“I feel like my career was getting really bad this year, and I needed to get my stock back up, and I just can’t believe it. Thanks to all these fans for coming out—what an awesome crowd! I hope you all enjoyed that race. It’s going to be a good one tomorrow (Sunday’s Monster Energy NASCAR Cup Series event).”

Briscoe took particular pride in winning the inaugural race on the Charlotte Road Course, which combines an infield section with the traditional oval punctuated by two chicanes.

“It’s huge to me,” Briscoe said. “Everybody had to adapt to it and figure it out, and I don’t know that I’m necessarily the best at it, but I felt like I just tried not to hit anything, and this thing hardly has a scratch on it.”

“These ROVAL races are always challenging for these series to put on, given the confines of the oval, but I thought it was great,” Marks said. “If we’re going to reinvigorate this fan base and we’re going to regain some positive momentum on our side, we’ve got to think outside the box and do things like this.

“So I really applauded the effort everybody made to put this track together. The track itself is challenging… The did a great job of painting the infield, there’s a lot of grip there, and it’s a really challenging course. But you want to challenge this group of drivers. You want it to be hard for them…

“I thought it was great. I thought it was awesome. You’ve got tight corners, and then you’ve got the things wound up to 160 miles an hour on the oval, and that’s a little bit of everything these cars do. That makes it an exciting event.”

Pole winner and Playoff driver Austin Cindric recovered from a spin in Turn 6 while leading on Lap 14 to finish third in front of Ryan Preece and series leader Christopher Bell, who has advanced to Round 2 of the Playoffs by virtue of his Sept. 21 victory at Richmond.

In fact, Cindric and Daniel Hemric had arguably the two fastest cars, but, like Cindric, Hemric made a mistake that cost him a chance to battle for the win.

On Lap 45, after the final restart, Hemric blew the frontstretch chicane and paid the prescribed penalty of a full stop in the tri-oval. He fell to 15th and fought his way back to 10th at the finish.

Approaching next week’s Playoff cutoff race at Dover, Bell is the only driver locked into the second round. With the field to be trimmed from 12 to eight contenders after the Dover race, Cindric is in ninth place, nine points behind Ross Chastain in eighth.

In the wide-open competition for the top eight spots, only 12 points separate third place Tyler Reddick from Chastain.

Check out the results of the Drive For The Cure 200.