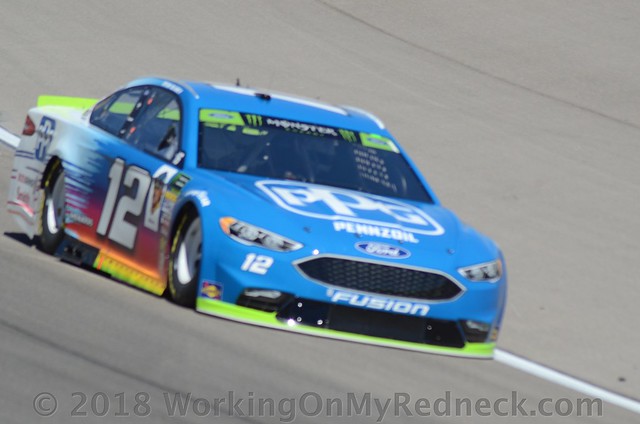 Only the top-12 drivers following the race will continue on in the Playoffs, championship eligible. But the fact is no one truly knows what to expect for Sunday’s debut of the 17-turn, 2.28-mile track at Charlotte Motor Speedway that includes a brand new infield road course as well as portions of the traditional 1.5-mile speedway.

It’s a big weekend for racers and race track.

The veteran Bowyer is making his first Playoff appearance in five seasons and carries a pair of 2018 trophies (at Martinsville and Michigan) in his quest. He had been ranked among the top-10 of the standings all year before suffering some tough Playoff luck in the last two week’s opening pair of championship races.

He finished 23rd at the Las Vegas Playoff opener and 10th at Richmond last week. However far from being panicked, the always affable Bowyer insisted Friday morning before opening practice at the Charlotte road course, that he was in a good place competitively and ready to make up that point gap.

“I think anytime you have something new like this, you have to look at it like an opportunity and I need an opportunity,” said Bowyer, driver of the No. 14 Stewart-Haas Racing Ford who spent 10 weeks as one of only four drivers with multiple wins this season.

“Four points out of the Playoffs and you need a good opportunity and that’s exactly what this track is. We had a good test here and I made a lot of laps that were relatively comfortable and I enjoyed it.

“I’m going to enjoy this weekend. The opportunity is there and we’ve got to go out there and take it.

In the morning trackside news conferences, both drivers were asked more questions about the new Playoff road course than about their particular precarious position in the standings.

Alex Bowman sits only one more point to the good than Blaney, the first-year Hendrick Motorsports driver holds a five-point edge on the Playoff cutoff position. His veteran Hendrick Motorsports teammate Jimmie Johnson is ranked 14th, only six points behind Blaney and seven behind Bowman.

Both Bowyer and Johnson – two veterans – have won a Cup road course race. Neither Blaney nor Bowman have. Bowyer won at Sonoma in 2012. The seven-time Cup champion Johnson won there in 2010. Blaney’s best road course finish in three full-time seasons of Cup competition was an eighth-place at Watkins Glen in 2017. Bowman’s best showing in his three full-time seasons was a seventh at The Glen this summer.

Johnson has a series-high eight wins on the Charlotte 1.5-miler, Bowyer has one. Neither Blaney nor Bowman has won at the Cup level there.

Yet as teams prepared for opening practice on Friday – with the threat of rain creating another variable – the great unknown of the venue dominated talk of who would advance to the next round of the Playoffs.

“It is what it is,” said Blaney, the driver of the No. 12 Team Penske Ford. “It’s a race track and we have our job to do.  … You have to make the best of it and I don’t think you can judge it really at all right now. You just have to get on it, race it and overcome it.

“If you have a bad outlook at it already you’re already kinda behind the 8-ball. You have to be positive about it and just try to do the best job you can. especially when you’re in our position. We’ve got to have a really good day Sunday to try and advance to the next round.”

Bowyer was also quick to bring up another element to this weekend’s competition; the fans. His Stewart-Haas Racing team held a big fan Open House this week since the race was in NASCAR’s Charlotte hub and he said the excitement for the venue was readily evident. And, he reminded, that would be a good thing to build upon.

“You know this was a good gauge for me,” Bowyer said. “Yesterday we did a fan day at the shop at Stewart-Haas Racing and the turnout was phenomenal. It really took me back pre-2008 in the world and especially our world of NASCAR, the energy, the turnout, the crowd that’s the way I remember the height of this baby.

“We finally have something new to sell to a fan and let me tell you they’re excited to see it. That got me excited. I think [Charlotte Motor Speedway executive] Marcus [Smith] has done a good job of turning this into an “event,” not just another race.

“We’re trying something new in our sport and I’m happy our sport is doing that.”

Especially so, Bowyer said smiling, if the new venue results in his ticket to keep advancing in the Playoffs.