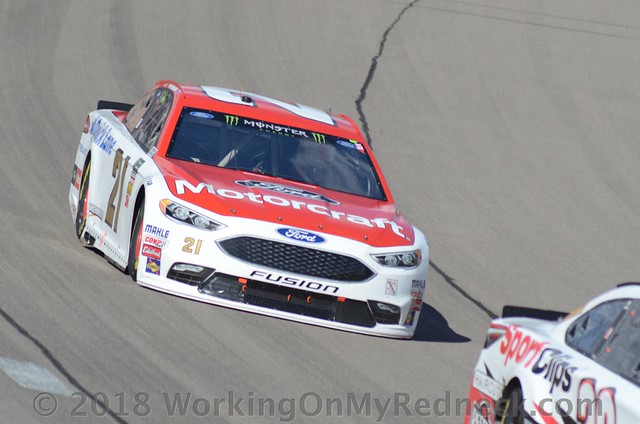 With the experience that comes from 427 career starts and 12 full seasons on NASCAR’s elite Monster Energy Cup Series, Paul Menard generally has a good idea what’s ahead of him when he heads to a race track.

But he’s never been to a track quite like the Roval at Charlotte Motor Speedway, where the Cup series races this weekend. The all-new Roval circuit is 2.28 miles in length, with 17 turns. It uses part of Charlotte’s oval track and the rest is on the updated road course.

“I have no idea what to expect,” Menard said. Although he has tested his No. 21 Motorcraft/Quick Lane Fusion there on three different occasions, he’s still looking at the upcoming weekend as a big unknown.

If anything, the test session showed that the course will be challenging.

“I crashed in two of the three tests,” he said. “The third one was OK.”

He said the third test was done using a tire compound similar to the one that will be used in Sunday’s Bank of America 400, and the track and car configurations will be essentially the same as what he experienced in that final test.

But the test sessions mostly consisted of single-car runs, whereas Sunday’s 109-lap, 400-kilometer race will have a full field on the track at the same time.

“It probably will be similar to what restrictor-plate races are like,” he said. “You’ll need to dodge spinning cars and take care of your fenders and your tires.

“It is what it is, and we’ll have to just go in there and try to get the job done.”