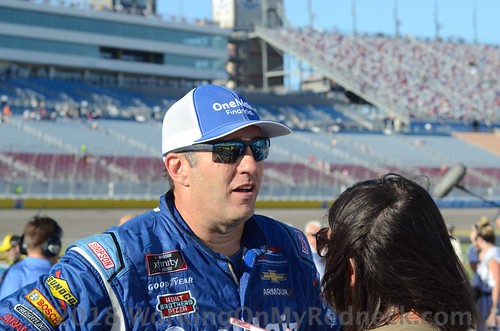 It wasn’t until the end of Friday night’s GoBowling.com 250 NASCAR Xfinity Series race at Richmond that it dawned on Elliott Sadler and Dale Earnhardt Jr. that they had probably raced together for the last time in one of NASCAR’s top three touring series.

Sadler is competing for a championship in the series. Earnhardt, who also is Sadler’s car owner at JR Motorsports, was running his only scheduled race of the season in the No. 88 JRM Chevrolet.

More than that, Sadler and Earnhardt are long-time friends, dating to the days when they drove Late Model Stock Cars. On Friday night, after Earnhardt led 96 laps and finished fourth, and Sadler came home sixth, they shared a heartfelt hug on pit road.

“We started racing together 25 years ago, and we have a special relationship,” Sadler said afterward. “It kind of hit us both there that this is out last time racing on the same track together. He and (Earnhardt’s sister) Kelley have meant so much to my career…”

Both Sadler and Earnhardt agreed that they may race Late Models at some point, but with one stipulation.

That would be a very interesting and powerful duo!