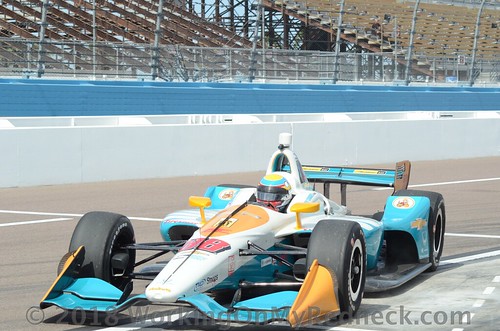 The duo, fresh off competing in the 2018 Indy Lights presented by Cooper Tires season, made their Verizon IndyCar Series debuts for Harding Racing on Sunday at the INDYCAR Grand Prix of Sonoma. O’Ward, the new Indy Lights champion, qualified fifth and finished ninth in the race. Herta, runner-up to O’Ward in the Indy Lights standings, qualified 19th and finished 20th in the season-ending race.

Harding Racing, owned by Mike Harding, joined the Verizon IndyCar Series for three races in 2017 before becoming a one-car, full-season effort this year. Steinbrenner Racing, owned by George Steinbrenner IV, fielded Herta the past two seasons in Indy Lights in an affiliation with Andretti Autosport.

“We are happy to announce that Mike Harding of Harding Racing and George Steinbrenner IV of Steinbrenner Racing will join forces in 2019 to become Harding Steinbrenner Racing,” team president Brian Barnhart said. “We will be making the move to a two-car team, fulfilling a goal we stated earlier in the year.

“We have decided to go all in for the future by hiring two recent stars of the Indy Lights presented by Cooper Tires series: Freedom 100 winner and Indy Lights series runner-up Colton Herta and reigning Indy Lights series champion Patricio O’Ward. We are thrilled with their performance in the 2018 Indy Lights series, in which they ran 1-2 for Andretti Autosport. We are also exceptionally proud to have recently provided them with them their inaugural Indy car experience at Sonoma Raceway.”

Steinbrenner IV, the grandson of the late flamboyant New York Yankees owner, has been a passionate INDYCAR fan for years. When he announced formation of the Indy Lights team in late 2016, his stated goal was ascension into the IndyCar Series.

“I am extremely excited to make the leap into the IndyCar Series,” he said. “Since I was a kid, it has been my goal to be a team owner in the IndyCar Series and I’m so excited to be doing that with Harding Racing. They are a team that shares our values that they don’t want to just be here, but to be a dominant mainstay in the series. That will continue to be our goal as we head into a partnership with a team that shares the same ideals and it makes life a heck of a lot easier.

“Excited to have two of the best young drivers on this continent and to have them both make the leap into the IndyCar Series at such a young age as teammates with Harding Steinbrenner. We’re looking forward to watching as they mature and fight to beat the grizzled veterans in the INDYCAR paddock. We’re so excited to see where that will lead, how the team can grow, and how we’ll compete so we can hopefully vault ourselves to the top of INDYCAR pylons.”

Team co-owner Harding is just as excited to pair up with Steinbrenner and move forward together.

“The 2018 INDYCAR season has been a tremendous learning experience for me,” Harding said. “Now I am eager to join with Steinbrenner Racing and create the powerhouse team I know Harding Racing can be. George Michael Steinbrenner IV entered the Mazda Road to Indy with the intent to win, and I believe Harding Steinbrenner Racing will quickly impress the INDYCAR paddock, too. Let’s go racing!”

O’Ward won nine of the 17 Indy Lights races to earn the championship. He was also runner-up in the 2016 Pro Mazda Championship presented by Cooper Tires before spending the majority of 2017 driving in the IMSA WeatherTech SportsCar Championship, where he was champion in the Prototype Challenge class.

“If you would have asked me if I was going to be an Indy car driver last year, I would have told you hopefully, but no,” said O’Ward, a 19-year-old native of Monterrey, Mexico. “It’s a chance of a lifetime. I couldn’t be in a better position as of now. I’m really thankful for the opportunity that Harding Racing, Mike Harding and the Steinbrenners are giving me. This is something I have been working my whole life for.”

Herta, the son of former Indy car driver and current IndyCar Series team co-owner Bryan Herta, won four races on his way to finishing second in this year’s Indy Lights standings. He became the fourth-youngest driver to start a race in Indy car history on Sunday.

“I am so thrilled to finally announce the plans for next year,” Herta said. “I know it’s been a long time coming. After having a good time in Sonoma and dipping my feet into Indy car (racing), it makes me way more enthusiastic than I was before. This is all possible because of Mike Harding, and I want to give a big thank you to the Steinbrenners. There is a lot to do, but I’m ready to get my head down and focus forward for the 2019 IndyCar (Series) season.”

The 2019 season consists of 17 races, opening with the Firestone Grand Prix of St. Petersburg on March 10. The season concludes at WeatherTech Raceway Laguna Seca near Monterey, California, on Sept. 22 and is anchored by the 103rd Indianapolis 500 on May 26.