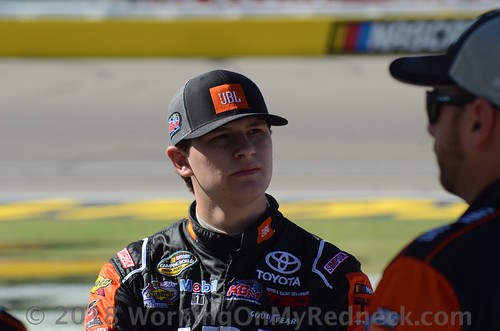 This past weekend, at Las Vegas, I got the opportunity to sit down outside Todd Gilliand’s hauler to talk about how he got to this level and where he thinks he would like to be in the future.  I was impressed with his humility, self-confidence, and his maturity for being just18 years old.

Herein is the bulk of our conversation:

WorkingOnMyRedneck:  Todd, I know that you come from a racing family because I used to watch your grandfather, Butch, and your dad, David, race on the West Coast and in particular in the state of California.   Can you tell me how you got involved in racing?

Todd Gilliland:  Like you said racing is in my family and I have always been around it.  I think that I went to my first race when I was two weeks.  Just being around racing all of my life was a big factor.  I have developed my own love for racing, for sure, and I have never gotten away from it.

WOMR:  Was being involved in racing something that you wanted to do on your own, or did you feel that it was family pressure to drive race cars?

WOMR:  So you think that the doors have opened up a little easier having the Gilliland name, but that you are doing it on your own?

TG:  Yeah, but I think that I have a big enough fire to make it happen.  But it is easier to start a relationship with someone who recognizes the family name and may have worked with my dad previously.

WOMR:  Todd could you expound upon your racing resume, like your ARCA and K&N experience, for our readers?

TG:  The first big win was in ARCA in 2015,  just two days after I turned 15 years old.  With that, I became the youngest winner in ARCA history!  That win really put me on the map, we had been running good in K&N, but built up my confidence.  Later that year, 2015, we won a few more late model races so we went out to Phoenix for my first K&N start there and won that race.  In fact, I won my first four K&N starts.  That was all kind of crazy.  From that, we were able to win 10 K&N races last year.  In 2016 we were able to win nine races.  I have been involved with great people in racing like Bill McAnally Racing and Venturini Motorsports.  Now I am with KBM (Kyle Busch Motorsports) and I couldn’t have been with better organizations.

WOMR:  How did your deal with Kyle Busch Motorsports come to fruition?

TG:  One of the relationships that we have been working really hard with for a long time has been Toyota.  Obviously, Toyota has been involved with KBM for a long time with drivers like Christopher Bell, and Erik Jones.  It was a relationship that we obviously wanted to take, with KBM winning a ton of races and championships.  I have learned a lot transitioning from ARCA to the Truck Series.  I didn’t really think that it was going to be that much difference between the K&N car and the Trucks, but there is.  Now with KBM, it is great to have a truck that is capable of winning each and every race.

WOMR:  So are you saying that there is a lot of differences between the ARCA Series and Trucks?

TG:  One of the biggest differences are the larger race tracks.  It is a lot different racing around other trucks.  You don’t fight the aero issues on your right side or on the nose of your race car at the smaller race tracks of K&N and ARCA.

WOMR:  Is the turbulent air more noticeable and an issue at the larger race tracks?

TG:  Yes, it is.  At the mile and a half tracks it is very bad, once you get within about ten truck lengths you have to search around  the track in order to try to get out of their wake, out of their air, in order to find that dead spot.

WOMR:  Do you think that is the way it is on the larger tracks like Daytona and Talladega?

TG:  It is about trying to get out of their wake.  I have been talking a lot with my Dad about what to do and what not to do when we get to Talladega.  It is all about finding that “dead spot on your truck” where you don’t get any turbulent air.

WOMR:  Speaking out your Dad, David Gilliland, how much has he influenced you or tutored?  Is he your “go to guy”?

WOMR:  You started racing fulltime after May 15th, your 18th birthday.  What has been the biggest lesson that you have learned so far?

TG:  I have learned there are things that I can drive through.  There is a process whereby you can work through just about anything, whether you are tight or loose in the turns.

WOMR:  How difficult has it been to learn how to give good feedback to your crew chief, and knowing that it takes good communication between driver and crew chief to fix problems?

WOMR:  How much of an influence has Kyle Busch been on you?  Is he available to you for advice and tips?

WOMR:  Has Christoper Bell played any part in your season?

TG:  Other than just having his notes he hasn’t played any part.  Other than reading some of the older driver’s notes, they have not played a big part in this season.

WOMR:  What has been your highlight for your shortened 2018 season?

TG:  I would say our last race at Canadian Tire Motorsports Park.  We were so close to winning our first race, within about a hundred feet.  It still was one of our best races.  For the last 3 or 4 weeks, we have had a truck that could win races, that has made me really proud.  It takes good pit stops, good race calls to win a race and I felt like we had it all back there in Canada.  It was just about as close as you could get!  (a little laughter)

WOMR:  You are were referencing your clash with Noah Gragson costing both of you good finishes, possibly first and second.  Did you and your teammate, Noah Gragson, work out your differences after that race?

TG:  Yes we did.  There were a lot of meetings after the race.  We are teammates on the track and friends off of the race track, so we are all good.

WOMR:  What is it about Canadian Tire Motorsports Park that seems to offer up a last turn pass or crash for the race win?

TG:  You get a great run on the last straight that you can get up on the bumper of the truck that you are following, and those last three turns make for an opportunity to go for the win.  What Noah (Gragson) did was something that I would have done also.

WOMR:  Did you know that Noah was going to dive inside as you were getting to the last turn?

TG:  Yeah, but I should have never given him that opportunity to do that.

TG:  I would say that, with just a few races into this season, I didn’t think that the mile and half races would be so difficult.  It took a few races for me to get up to the level that I think I need to be.  But it is petty cool now to be a part of this team because we are clicking pretty good right now.

WOMR:  So do feel now that you are making progress by leaps and bounds now?

TG:  Looking back at my low point there were races when I felt that we were worse this week than we were the week before.  But that has all turned around now.  Even though we were at a points deficient to make the Playoffs, now that we didn’t make them we are actually getting much better and that the pressure to make the Playoffs is gone.

WOMR:  Do you feel that the pressure is greater at the Truck level?

WOMR:  So now that this season is winding down, what plans do you have for next year?

TG:  I don’t have anything done yet.  We are hoping to be back in The Camping World Truck Series next year to chase a championship.

WOMR:  Are you hoping to be back with KBM next year?  Although your Dad is partners in a truck team.

TG:  Yeah I would like to be back with Kyle Busch Motorsports for 2019.  My dad is busy selling rides and getting his own brand going there.

WOMR:  Todd where do you see yourself in five years?

TG:  Oh I don’t know.  Five years is a long way away.  It all depends on how you perform.  William Byron was just one year in each of the top three series of NASCAR, so you just never know.  Really, there is no reason why I couldn’t be in the Cup series in five years.  By winning races, that will dictate what I will be doing in five years.

Todd is absolutely correct.  This sport is a performance-based profession.  If you win on a regular basis that generates attention, that attention will get you with the right team owner, and your career will blossom.

After spending a little time interviewing Gilliland over the NASCAR weekend at Vegas, the attributes I noticed in Todd were determination and humility.  Todd is a very well mannered, but confident young man that will be going places in NASCAR.  Keep you eyes on this young gun!

I do think that you will see seeing this young man racing for wins very soon.  In fact, I will go out on a limb, this may be your 2019 CWTS champion if he returns to KBM next year!