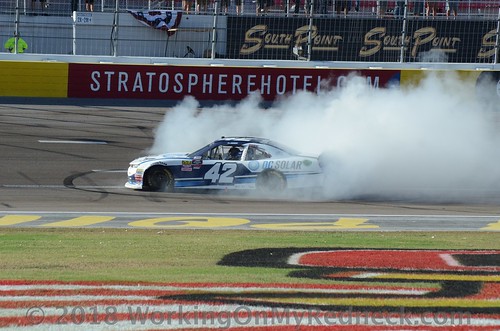 Two weeks ago at Darlington, Ross Chastain showcased his potential in the No. 42 Chip Ganassi Racing Chevrolet, leading 90 laps before falling out of the race in a dust-up with veteran Kevin Harvick.

Chastain led 180 of 200 laps and swept the first two stages at the 1.5-mile track. To cement the victory, he held off five-time winner Justin Allgaier, who clinched the regular-season championship and accompanying 15-Playoff-point bonus after finishing fifth in Stage 2.

“Holy cow! I’m just a watermelon farmer from Florida—I’m not supposed to do that,” said Chastain, who carried one of his trademark watermelons to Victory Lane. “This shows you anything in your life is possible. I gave one away at Darlington, and this was awesome racing.

“I never thought this would happen. It’s incredible. Allgaier was awesome. He’s insane. I had to play possum there (on the restarts) and then changed it up. The car was just amazing. This was all we could ask for. We did it!”

In a car that showed its superiority on longer runs, Chastain was forced to win the race in short sprints. Vinnie Miller’s spin on Lap 175 caused the sixth caution and forced a restart on Lap 181. Trying to side-draft Allgaier right after the cars took off, Chastain brushed the side of Allgaier’s No. 7 JR Motorsports Chevrolet and kept the lead.

On a Lap 188 restart, after Chase Briscoe’s brutal crash into the inside backstretch wall, Chastain moved up the track to block Allgaier’s run into Turn 1—and kept the lead.

On the final restart with five laps left, after a five-car pileup slowed the race for the eighth time, Chastain cleared Allgaier through Turns 1 and 2 but got a tap from the No. 7 car that propelled him forward down the backstretch.

Chastain pulled out to a 1.629-second lead at the finish.

Allgaier confessed to a moment of frustration after the side-to-side contact on Lap 181 but had cooled down by the time the final restart rolled around.

“I tried everything I could do to pass him as clean as I could,” Allgaier said. “That restart there, I thought we had a good shot at it. We had done a good job on the regular-season championship and had locked it up… what I was afraid of was blowing the left-rear tire. We had made contact right at the left rear tire, and that was my biggest fear.

A bone-jarring wreck in Turn 4 interrupted Chastain’s dominance of the first two stages. Matt Tiift’s No. 2 Chevrolet turned sideways in the middle of the corner, right into the path of Ryan Reed’s No. 16 Ford. Reed slammed into the front-left of Tifft’s Chevy, and both cars rocketed into the outside wall.

Reed climbed from his car and sat down on the asphalt, leaning against the car door as he collected himself.

“I haven’t seen the replay, so I don’t know exactly what happened,” Reed said after exiting the infield care center. “Not sure if he lost a tire or what. That was a tough one. Knocked the wind out of me pretty bad. The right side is all banged up.

“I’m all good. Nothing broken or anything. I’ll just be sore tomorrow. Thankfully, everyone on our Ford Mustang worked really hard this weekend. I feel like we were getting it better and able to run the top 10 once we got the car a little better. It just got cut short, unfortunately.”

The only consolation for the early exit is that Tifft already had secured a position in the Playoffs, and Reed locked himself into the final berth despite falling out in 35thplace.

Check out the results of the DC Solar 300.