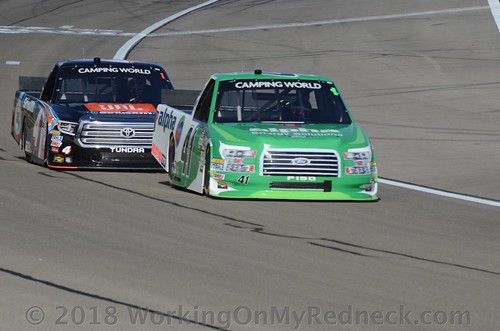 What to watch out for at Vegas:

Cup driver Kyle Busch won the race here in March but is not entered in this week’s Playoff round.

Ben Rhodes, who is among the Playoff contingent, won in 2017 and defending series champion Johnny Sauter won in 2009. They are the only two members of the eight-driver Playoff field to hoist a trophy in Vegas.

Toyota has won the last five manufacturer’s championships. Should they win in 2018 it would be a record for most consecutive wins.

Chevrolet has won the most races (9) at Las Vegas.

Justin Haley, 19, is the youngest member of the Playoff field and the only one to have already secured his entry into the next round thanks to a win in the Playoff opener at Canadian Tire Motorsports Park two weeks ago.

Eight times the pole-winner has gone on to win the race – the most prolific starting position.

Erik Jones is the youngest championship driver in series history, winning the big trophy in 2015 at the age of 19.

Playoff contender and two-time former series champ Matt Crafton has won at every 1.5-mile track the series visits except for Las Vegas and Chicagoland.

At 42, Crafton is the oldest driver among the playoff eight. Of note, Ted Musgrave won the 2005 title when he was 50.