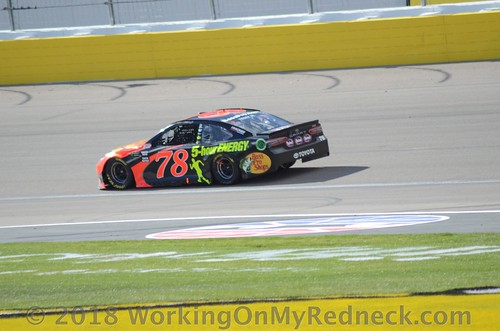 The reigning Monster Energy NASCAR Cup champion fully knew his plans for next season would be as important a topic to reporters as his present run for a second consecutive season title.

Two weeks ago, his Furniture Row Racing team announced it would seize operations at the conclusion of the season – leaving Truex’s team with an uncertain 2019, although rumors are rampant that he and most of the team will land in a good place.

Truex spoke to the situation immediately as reporters began gathering around him at Las Vegas’ South Point Casino during a Media Day opportunity with the 16 drivers who qualified for NASCAR’s Playoffs. The 10-race pursuit of the 2018 championship begins with Sunday’s South Point 400 at Las Vegas Motor Speedway.

But first, Truex left no doubt about his commitment to the FRR team and that team’s absolute focus on claiming a second consecutive Cup championship. He seemed confident in keeping the course and reminded that his team’s attention was on 2018 – on becoming the first driver to win consecutive titles since Jimmie Johnson reeled off five straight from 2006-2010.

“I feel like we’re in a great place,’’ Truex said of his title hopes. “We definitely want to repeat, no question about it. I think you could take all this [team news] one of two ways. You could hang your head down and say, ‘this sucks, why are we in this position’ and be mad at the world.

“Or you can look at each other and say, ‘let’s go do this.’ And I feel like that’s where we’re at.  … Look at the names on our team, their names were made at Furniture Row and [team owner] Barney [Visser] giving us the opportunity to work at a great place and giving us all the tools we needed to go out and win a championship. So I think all of us, we look at that and say, ‘Hell yes. Let’s go do this. Let’s send Barney out on top, give him the best going-away gift we ever could.

“I truly, honestly feel like that’s our mindset, that’s our focus and I have no questions about where our team is and how they’ll approach the Playoffs.”

Truex has good reason for the hopeful attitude. A member of the season’s “Big 3” – a group that includes regular season champion and six-race winner Kyle Busch, seven-time race winner Kevin Harvick and himself, four-time winner – it’s been a successful answer to his 2017 trophy hoist.

Truex has scored 15 top-five finishes through the opening 26 races in the No. 78 Furniture Row Racing Toyota, putting him on a good pace to answer his career-best season mark of 19 (2017) with 10 races still remaining.

He’s won races at Fontana, Calif., Pocono, Pa., the Sonoma, California road course and the Kentucky 1.5-miler this year. And, he’s finished runner-up another four times – including back-to-back at Kansas and Charlotte to start the summer.

It’s the good vibes he hopes the team reclaims this weekend after just enduring a rough three-race outing. In the previous three weeks he’s had two DNFs, resulting in a 30thplace finish at Bristol, Tenn. and a 40th place finish at Indy on Monday – his worst outcome of the year.

Yet even with five DNFs on the season, Truex’s average finish is 11.3 – second only to his title winning mark of 9.4 last year.

“I look at our potential and I know what we can do,’’ Truex said. “These last three weeks are a perfect example. We get crashed at Bristol, were running second at Darlington. … then last week we ran 40 laps and broke the brake rotor. But we’ve had speed and I key on speed.

“We’re fast. I know we can win races and if we do things right we’ll be in position. Can we capitalize? That’s the question. That’s the hardest thing to do in racing. Can you take advantage of all the opportunities? When the race is on the line can you have that pit stop that keeps you in position?

“It’s the little things like that make the difference and we were able to be perfect on them last year. Our average finish was stupid, like 2.5 in the Playoffs and that’s what it takes. I know we can do it, it’s just a matter of going out there and getting it done.’’

As for distractions, Truex has proven to be a master of focus. He’s faced challenges in his career and in his private life (his longtime girlfriend Sherry Pollex is battling ovarian cancer). And right now, it’s really all good – he’s the defending Cup Series champion, armed with four wins and a highly motivated single-car team intent to earn a second straight title for a beloved retiring owner.

“I’ve been tested and gone through adversity quite a bit,’’ Truex said. “But that’s life. That’s just part of it. How you get through those things is how you show what you’re made of.

“Anyone can win, anyone can have great days and have things go all their way. That’s easy. Anybody can do that. When you show your true colors are when you’re put in tough situations. I’ve got a great team behind me and we know what it takes and we’re going to put it all together and see what happens.”