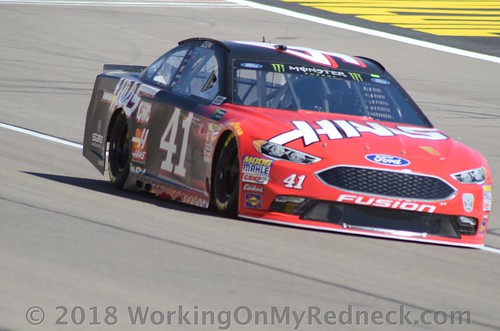 Despite rumors that he is headed to Chip Gannasi Racing next year—and though team owner Chip Ganassi has confirmed that Jamie McMurray won’t return to the No. 1 Chevrolet in 2019—Kurt Busch says he remains unsigned beyond this season.

Busch is driving the No. 41 Ford as one of four Stewart-Haas Racing entries in the Monster Energy NASCAR Cup Series Playoffs, which start with Sunday’s South Point 400 at Las Vegas Motor Speedway.

The contract limbo has become familiar territory for Busch in recent years. Last season, Stewart-Haas declined to pick up Busch’s option before re-signing him later to a one-year deal. This season, Busch has acknowledged fielding offers from more than one team but has yet to announce his plans for next year.

“It’s all the same stuff that I’ve been through before, and I don’t look at it like a (distraction),” Busch said. “The contracts that I signed when I was a rookie or a younger guy, they were five-year deals. And now, as of late, I haven’t signed anything that was more than two years.”

Busch, however, doesn’t think the uncertainty of his future will affect his prospects for a second Cup title.

“So each week, when I fire up the car for the first Friday practice session, that’s the best feeling, ‘cause I know that I’m going into a zone that I can control the most, and that keeps me away from having to think about other stuff during the week.”