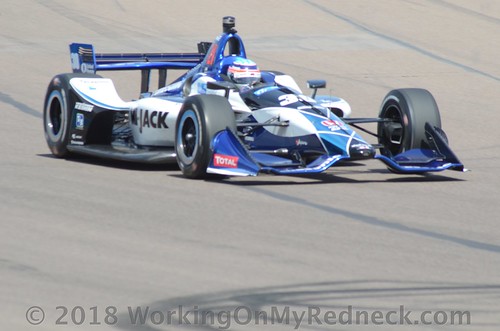 TAKUMA AT SONOMA RACEWAY AND THE 2018 POINT STANDINGS

The Grand Prix of Sonoma will be Takuma Sato’s ninth race here. His best start came last year of fifth place with Andretti Autosport and his best finish came in 2014 of fourth place with A.J. Foyt Racing. He has a total of two top-10 finishes with eighth place in 2015, also with A.J. Foyt Racing. His win at the previous race in Portland enabled him to move from a pre-race rank of 13th to 11th with 341 points.  He is 50 points behind seventh-place Robert Wickens, who has 391, and 38 points ahead of 14th place Ed Jones who has 303.

“It’s a very challenging track in terms of engineering because there are many corners that could conflict with each other for best performance so it is always tough to find a good compromise point.  It’s very challenging for drivers too with high speeds and a few blind corners which make it a lot of fun but you definitely need a good commitment! I always enjoy coming back to Sonoma but at the same time, it’s very difficult to predict because the track is actually quite slippery.  Usually, the tire compounds are very soft which means it has a high degradation so to get the balance right is very tough and race performance really depends on that.  But, having said that, it will be the last chance to get a strong result so we want to have a good race. Sonoma is going to be a big weekend for everyone. We will focus on being at a high competitive level. If we could finish strong then the overall standing should raise too. I want to have a good race. It’s been a tough season for the team but we always fought back strong and at the mid-season point, to rate the season we were very strong despite some unlucky moments. Highlights of the season were podiums at Iowa and Portland but there were many races we felt we had some good potential.”

TAKUMA ON MOMENTUM FROM HIS PORTLAND WIN AND BEING ABLE TO CELEBRATE
With the weekend off of racing since the Grand Prix of Portland, Sato was able to enjoy being the most recent race winner for more than one week.  He is thankful that the experience will carry over to Sonoma and provide momentum for a strong end to the season.

“There is always high motivation for any race weekend but winning is such a special moment and the boys (crew) and engineers should really feel proud and positive. I certainly hope the win provides extra motivation!  It definitely gave us good momentum for Sonoma for sure. An off weekend after a win is very good! I enjoyed the moment.”

Both Graham and Takuma tested at Sonoma Raceway last Thursday with Team Penske, among others.  Many other drivers and teams will test this Thursday before the official race event begins on Friday.  Testing last week enabled the engineers time to analyze the data prior to returning to Sonoma Raceway this week.

“The reason the team chose to test last week rather than a day before race weekend starts was simply to have more time to analyze and gain knowledge for the weekend,” added Sato. “I think the test went well although we were not fully happy in terms of lap time but with the new car, there was a lot to learn.  Certainly, we gathered very good data for the day.”

“It will be quite exciting to watch,” added Sato. “I think all the contenders have a chance to win the championship and that shows how competitive INDYCAR was all year. Certainly, we want to have the most respect for the championship contenders this weekend but if there is any clean chance then, of course, we will compete strong (with them). It’s going to be a very exciting weekend.”