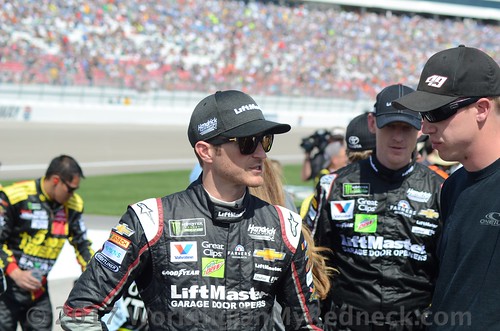 In a Friday conference call with reporters, Kasey Kahne provided greater detail as to why he won’t be racing in Sunday’s Big Machine Vodka 400 at the Brickyard.

The issue has been a chronic problem that came to a head at Darlington, even though Kahne had made a point to stay hydrated in the days leading up to the event.

“I was super hydrated,” said Kahne, who announced in August he will retire from full-time Cup racing at season’s end. “I was in really good condition going into the race. Had a great practice on Friday. About halfway through the race, I started getting to the point where I couldn’t drink anymore. Once I can’t drink anymore, I’ve already lost a lot more at that point in time in fluids than what I was able to put in.

“That’s why (when) I can’t drink anymore, it will start coming back out. I keep drinking the most that I can throughout the rest of the race, but it just gets super hard. My body keeps sweating so much that I have, like, absolutely nothing left by the end of the race.”

Kahne slowed down and tried to stay as motionless as possible inside the car because his heart rate was elevated.

“At Darlington, about 100 (laps) to go, it was really hard to keep my eyes open and see,” Kahne explained. “I was struggling to do that. I was trying to control my heart rate because it was so high. I basically just kind of laid in the car and drove around the corners.

“I had to just control the car just to try to do as little as possible, so my heart rate would go down because it was so high. At that point, all I’m doing is focusing on my body and my health, not on what I should be actually focusing on, and that’s racing.

Since then, Kahne has been working with his doctors to trying to find a solution.

“It’s just been a rough week,” he said. “That’s where I’m at today. Not racing Indy. Really tough decision. I would much rather be there than not.

“At this point I have to just figure out how to finish these races, how to be able to go that long in a hot car in the environment that we’re in, between the air temp and the dew point degrees, just to control it all.”

If Kahne can’t find a way to combat the condition, he may miss more races than the Brickyard 400. The forecast for the Sept. 15 event at Las Vegas Motor Speedway calls for 100-degree temperatures throughout the weekend.

“Just taking it one race at a time,” Kahne said. “My whole reason for doing this is because I know that Indy is a tough one, the dew point is always up there. I just know that I’ll be in that same situation there.

“For the full race, I’d be in the same situation. I can’t go through it again, so I’ve had to not go there, you know, learn more by the next one, decide from there.”