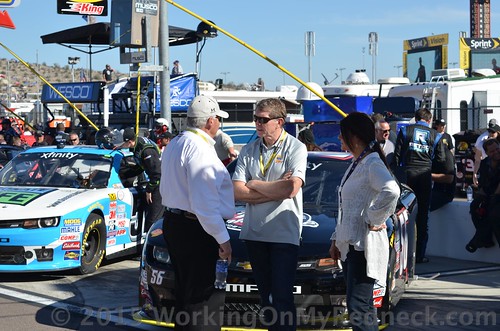 It may as well be billed as an “awesome” weekend. NASCAR’s Xfinity Series race Saturday on the famed Road America road course will include a current NASCAR Hall of Famer on its grid for the first time ever, popular driver Bill Elliott, who was nicknamed “Awesome Bill from Dawsonville” during his championship time competing in NASCAR during the 1980s, 90s and 2000s.

The 1988 Cup champion will steer the No. 23 GMS Racing Chevrolet in Saturday’s Johnsonville 180 , making his first start in one of NASCAR’s national series in six years and the first start in the Xfinity Series since 2005. His only Xfinity Series win came on a road course – at Watkins Glen, N.Y. in 1993.

Ironically, the Hall of Famer will be considered a “rookie” at the beautiful 4-mile Wisconsin road course since he has never competed there before.

“When this opportunity came up from Mike (Beam), I had to jump on it,” Elliott said in announcing the news earlier this month. “Chase (Elliott) has ran a handful of races for the team so I figured I would give it a shot at Road America. Beam and I have worked together in the past so it will be exciting to get back behind the wheel and bring back some old memories.”

Elliott’s 22-year old son Chase, who won his first Monster Energy NASCAR Cup Series race this month on the Watkins Glen, N.Y. road course, will serve as spotter for his father during this off-week from Cup competition.

The field for the Johnsonville 180 includes a bevy of big names, from Elliott to IMSA road racing stars Andy Lally and Katherine Legge, to IndyCar standouts like James Davison, who led the opening laps of last year’s race at Elkhart Lake to Connor Daly, who is making his NASCAR competition debut. And longtime NASCAR fan favorite Brendan Gaughan is entered too.

There have been eight different winners in as many races on the course. Jeremy Clements picked up his first career win last year.

This is also a significant stop in firming up the Playoff picture. With four races remaining to establish championship-eligibility, Ross Chastain holds the final Playoff position with a 42-point edge over Michael Annett, who was a career-best runner-up in this race last season.