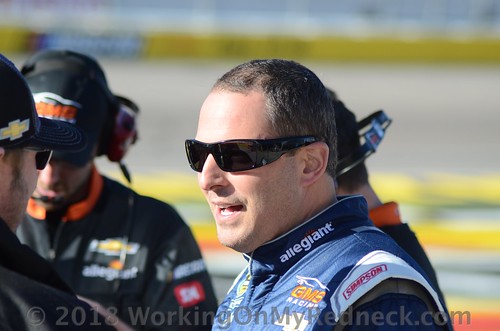 Johnny Sauter secured his fifth win of the 2018 season Thursday night at Bristol Motor Speedway to claim the NASCAR Camping World Truck Series (NCWTS) Regular Season Championship and the top spot in the NCWTS Playoff field heading into next Sunday’s race at Canadian Tire Motorsport Park. The victory is Sauter’s 22nd win in the series, placing him in a tie with two-time NCWTS champion Todd Bodine for fifth on the NCWTS all-time wins list.

The Necedah, Wis., native joined GMS Racing in 2016 and started off the season with a win at Daytona International Speedway. In addition to winning the 2016 NCWTS Championship, Sauter has earned 12 wins, 37 top-five and 51 top-10 finishes in 62 starts with the team.

The title of NCWTS Regular Season Champion is just the latest accomplishment in a long list of milestone moments for Sauter this season. His season-opening win at Daytona, his third win at the track, made him the winningest driver at Daytona in NCWTS history. It was also GMS Racing’s third consecutive Daytona win (2016 J. Sauter, 2017 K. Grala, 2018 J. Sauter), tying Bobby Hamilton Racing for series-most wins at Daytona.

Sauter became only the second driver in NCWTS history to claim multiple wins at Dover International Speedway in May; it was also the first time Chevrolet claimed back-to-back wins at the track. Sauter picked up his 20th career NCWTS win and 10th win with GMS at Charlotte Motor Speedway and followed that up with another win two weeks later at Texas Motor Speedway. The win at Texas was his fifth win in Fort Worth and made him just the third driver in NCWTS history to earn four or more wins in the first eight races of the season.

The regular season finale at Bristol locked-in the eight-driver Playoff field, which includes Sauter’s GMS Racing teammate Justin Haley. Haley secured his chance to compete for his first NCWTS title with his first NCWTS career win at Gateway Motorsports Park in June. This is the third-consecutive season GMS has had two drivers competing in the Playoffs, and the first time GMS Fabrication will compete with three entries by way of Halmar Friesen Racing driver Stewart Friesen racing his way into the Playoff field in Bristol.

The 2018 NCWTS Playoffs kicks off at Canadian Tire Motorsport Park on Sunday, August 26 with the Chevrolet Silverado 250. The race will air live at 2:30 pm ET on FS1 and MRN.