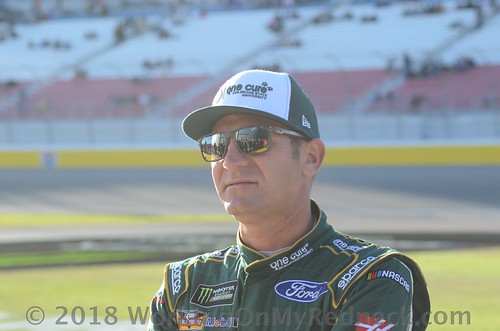 ● Bowyer was 10th after the first lap when a multicar accident brought out the caution.

● During competition caution on lap 60, Bowyer pitted for four tires and fuel. Only adjustment was to tire pressures.

● Restarted third on lap 67, but fell to sixth before rallying to fourth by lap 75.

● At the conclusion of the stage, Bowyer brought the No. 14 Rush Truck Centers/Cummins Ford to the pits for four tires and fuel.

● Was fifth at lap 150, but by lap 163, Bowyer radioed that his Rush Truck Centers/Cummins Ford was “way too loose.”

● Caution on lap 199 allowed Bowyer to pit for four tires and fuel with a right-rear wedge adjustment.

● Restarted in 10th on lap 204 and climbed to seventh after one lap.

● “Got a little tight toward the end,” said Bowyer at the end of Stage 2.

● Pitted for four tires and fuel at end of the stage, and reversed previous right-rear wedge adjustment.

● Bowyer brought his No. 14 Rush Truck Centers/Cummins Ford up to fifth by lap 290.

● Passed Almirola for fourth on lap 311.

● Cracked top-three with pass of Joey Logano on lap 320.

● Caution on lap 353 sent everyone to pit road. Bowyer was happy with his car and radioed, “No changes.”

● The pit stop was fast, allowing Bowyer to take the lead on lap 356.

● Bowyer continued to lead until lap 476, where a caution forced one final restart.

● Busch, who was running in second, took the lead from Bowyer on lap 477 as Bowyer spun his tires, dropping to sixth.

● Bowyer led twice for 120 laps to increase his laps-led total at Bristol to 257.

● Kurt Busch won the Bass Pro Shops NRA Night Race to score his 30th career Cup Series victory, his first of the season and his sixth at Bristol. His margin of victory over second-place Kyle Larson was .367 of a second.

● Busch delivered the 100th points-paying victory for Ford’s Fusion in the Monster Energy NASCAR Cup Series. It was Ford’s 669th all-time win in the NASCAR Cup Series and its 37th victory at Bristol.

● There were nine caution periods for a total of 70 laps.

● Only 15 of the 40 drivers in the Bass Pro Shops NRA Night Race finished on the lead lap.

“I just clearly didn’t do a good job on the restarts. When I had the lead I thought I got a good jump and about the time I shifted Kurt (Busch) hit me in the door and it just lit the tires up. He didn’t do anything wrong – it’s just a product of it. Then when I was on the bottom, I spun the tires really bad and they all got around me. It’s disappointing. You get a car that good and you get that close you hate to not come home with it, but, all in all, for as terrible as we started the weekend and as bad as our day was yesterday, to lead laps or even be in the top-10, I was pretty surprised, to be honest with you. In the grand scheme of things, it was a pretty good run for us, but you hate to give them up like that.”

The next event on the Monster Energy NASCAR Cup Series schedule is the Bojangles’ Southern 500 on Sunday, Sept. 2 at Darlington (S.C.) Raceway.