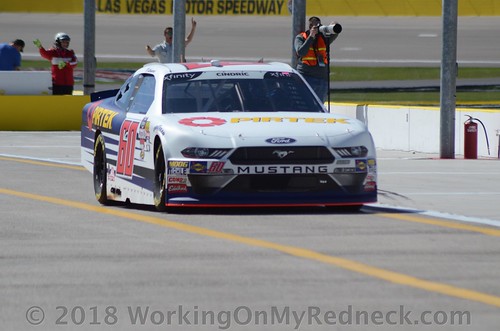 You have to feel sorry for crew chief Mike Kelley, who is tasked with preparing the No. 60 Roush Fenway Ford for a trio of young Xfinity Series drivers—Chase Briscoe, Austin Cindric, and Ty Majeski.

No matter which young gun is driving the No. 60 Mustang, the car can’t seem to avoid trouble, often through no fault of the drivers.

Cindric was behind the wheel in the season-opening race at Daytona and crashed out in last place after 10 laps, the first of eight DNFs for the No. 60 this season. All told, the car has sustained damage in 17 of 22 races and has finished on the lead lap just seven times.

Majeski owns the best finish in the car this year, a seventh at Iowa, but that came after he crashed out in his first three races in the 60.

On Friday night at Bristol, with Briscoe driving, bad karma (or maybe it should be “carma”) once again struck the star-crossed Mustang. Racing side-by-side with Ross Chastain, Briscoe washed up into Chastain’s car and nosed into the inside wall, ending his race after 142 laps.

“I just got racing with the 4 (Chastain) really hard,” Briscoe said. “I’m all for hard racing, but it’s just frustrating when he lets four guys in a row go.  We were faster than him and just kept hitting on him and hitting on him. I just kept trying to pass him on the inside.

“I could never clear him, and I just got tight underneath him and drove up the race track a little bit and got my right-front up into him and spun out and hit the inside wall. It’s definitely frustrating.

“I hate it for all the 60 guys. They’ve had to work on a lot of race cars this year. I felt like we had decent speed tonight and maybe could have contended for a top-10, but the day got cut short.”

Given the history, perhaps it’s time to do what you do when an old girlfriend won’t stop calling—change the number.