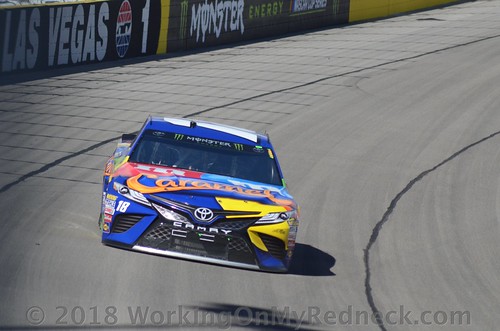 Immediately upon taking his seat in front of the microphone Friday for a press conference at Bristol (Tenn.) Motor Speedway, Monster Energy NASCAR Cup Series championship leader Kyle Busch was posed with a rather philosophic question. And he was ready.

With the championship points lead, six wins and perennial contention for another win each week, Busch was asked about being branded the “driver to beat” as the circuit prepares to wind down the regular season with the Bass Pro Shops NRA Night Race on Saturday night. The 16-driver playoff field will be set following the Sept. 10 race at Indianapolis Motor Speedway – only three races away.

Busch is the two-time defending Bristol race winner and has a remarkable total of 21 wins in the three NASCAR national series at the short track – nicknamed “Too Tough To Tame” for apparently everyone not named Kyle Busch.

“It’s been a long time, I guess, in being with different teams and different crew chiefs and different people that I’ve felt this strong,’’ allowed Busch, driver of the No. 18 Joe Gibbs Racing Toyota.

“I’ve had this sort of thing on the Xfinity side with many a crew chiefs, whether it’s been (Jason) Ratcliffe, or Adam (Stevens) or Chris Gayle – a few of them on the Xfinity side. Dave (Rogers) – we felt like we had that going for a couple years on the Cup side with Dave, but there is just something maybe a little bit more about myself and Adam and the team that we have.

“Many of the team guys – couple of them are the same as what they were back with Dave many years ago and a few of them are from the Xfinity team when I felt so good with Adam on the Xfinity side. We brought some of those guys over and we’ve kind of mixed and blended some other guys over the years here and there. It’s certainly been very rewarding to all of them, I’m sure, as well as me to have this group right now and hopefully, we can keep it together for a long time.”

The mix of team members and that stability certainly suggests good times remain ahead. Even when Busch doesn’t win, he keeps the winner honest. He and seven-time race winner Kevin Harvick along with four-time race winner, defending series champion Martin Truex Jr. is affectionately referred to as the series “Big 3” and have certainly delivered a title chase for the ages.

In the 17 races that Busch hasn’t won, he’s finished second or third eight times – runner-up in four of those races. In all, he’s finished top-three in 14 of 23 races, a remarkable statistic in this era of high competition. He leads Harvick by a healthy 62-points in the standings with a 15-point playoff bonus awaiting the regular season champ.

Certainly, at Bristol, Busch must feel especially confident. He has seven Cup wins, nine Xfinity Series wins and five Camping World Truck Series victories. This weekend last year, Busch won in all three series – something he has achieved twice at Bristol (also in 2010) and something no other driver has ever done.

“Certainly, Harvick has been fast there, too,” Busch said. “…But, obviously, we’re kind of on a hot streak with Bristol. We love going there. I would like to think that we can go there, be fast and be able to respond, absolutely. So we’ll see what we can do getting there, and hopefully having a fast racecar and doing what we normally do there, just try to stay out of trouble. It’s a tough place to stay out of trouble.

“This is the first time we’ve had M&M’S White Chocolate on the car, so hoping it keeps the good-luck streak alive and we can win three Cup races in a row for the first time there.”

He has good reason to feel hopeful well beyond Bristol too. He has a win and eighth top-10 finishes in 13 starts at Darlington (S.C.) Raceway where the series races after Bristol. He was runner-up in the race last year.

At Indianapolis Motor Speedway, home of the 2018 regular season finale, Busch is a two-time winner (2015-16) joining Jimmie Johnson (2008-09) as the only drivers to win back-to-back races at the historic track. He has an amazing 10 top-10 finishes in 13 starts there including a pair of runner-up finishes in addition to his two victories. And he is the two-time defending pole winner there.

At this point, those two races loom as extra opportunity. A third consecutive win at Bristol Saturday night would ironically tie a mark set by Busch’s older brother Kurt, who drives the No. 41 Ford for Stewart-Haas Racing. Other than the Busch brothers only NASCAR Hall of Famers Cale Yarborough (four consecutive wins, 1975-1977) and Darrell Waltrip (seven consecutive wins from 1981-1984) have longer winning streaks.

“Bristol Motor Speedway is one of the best racetracks on the circuit,” Busch said. “All the fans love it because of the excitement, the run-ins and the close-quarter action with all the cars being packed on top of one another at a half-mile racetrack with us 40 lunatics running around in a tight circle.

“With the fans, the atmosphere there always makes for a good time.”