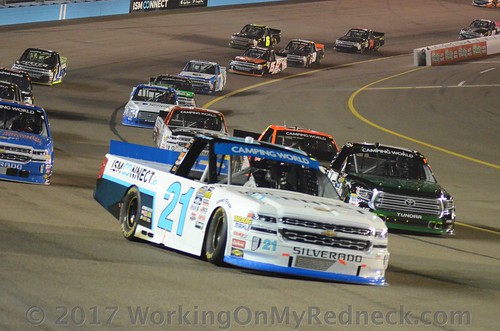 Passing John Hunter Nemecheck for the lead on Lap 196 of 200 at Bristol Motor Speedway, Johnny Sauter picked up his series-best fifth victory of the season, along with the NASCAR Camping World Truck Series regular-season championship, but fellow two-time champion Matt Crafton wasn’t about to begrudge Sauter his success.

Thanks to Sauter’s win, Crafton grabbed the eighth and final spot in the NCWTS Playoff on points. Also advancing to the Playoff in Thursday night’s UNOH 200 were race runner-up Stewart Friesen, as well as Grant Enfinger, who clinched the sixth Playoff berth when he took the green flag to start the race.

Nemechek passed Sauter for the lead in heavy traffic on Lap 177, but after pulling out to a lead of more than 10 truck-lengths, Nemechek suffered fuel pickup issues late in the race, allowing both Sauter and Friesen to pass him before the finish.

“I’m so proud of this team,” said Sauter, who won for the first time at the .533-mile high-banked concrete track and the 22nd time in his career. “I knew we had a great truck today. What a way to cap off the regular season with a win. I had to race really hard with the 52 (Friesen) there for a while, which was exciting.”

In fact, Sauter and Friesen waged an intense battle for second place, with Freisen briefly gaining the spot in traffic before Sauter prevailed by splitting the middle between Friesen and a lapped truck. That proved to be the winning pass, after Nemechek had his troubles in the last few laps.

“I’ve never won at Bristol before, so I was pumped,” Sauter said. “I’m so lucky I’ve got this group of guys. We won at Bristol—this is the ultimate. For a short track guy, and I consider myself a short-track guy, to get a win at a place like this is so special.

“I’m just pumped, and I can’t wait to start our championship run.”

Still seeking his first victory in the series, Friesen nevertheless reveled in the competition.

“That was probably the most fun I’ve had all year,” Friesen said. “Bumping and grinding, and no better guys to race with than John Hunter and Johnny. We’ll take it and move on.”

Notes: Sauter led 58 laps to Nemechek’s 104. Nemechek won both the first and second stages. Sauter enters the Playoff as the top seed, with 42 playoff points to 27 for Moffitt in second and 22 for Gragson in third.

Check out the results of the UNOH 200 at Bristol.