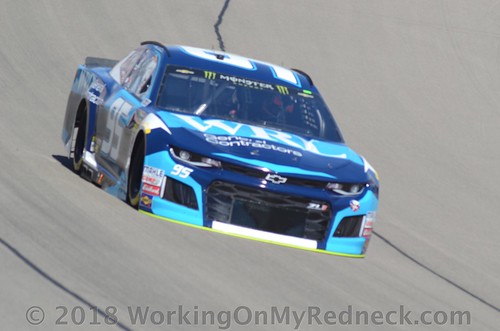 Now that Kasey Kahne has announced that 2018 will be his last season in NASCAR, you may be hearing a couple more announcements coming out of Leavine Family Racing before season’s end at Homestead.

There have been rumors filtering throughout the garage for the last several weeks that LFR may be announcing a manufacturer change from Chevrolet to Toyota for 2019.  If, in fact, LFR does switch over to Toyota in the very short offseason between the 2018 and 2019 season, there may be a few more changes that may accompany that move.

The alliance with JGR would also have some very good benefits for both LFR and JGR.  Now that Kahne has opted to leave NASCAR the  Leavine Family Racing team at the end of this season, LFR is now looking for a quality driver to pilot their hot rods in 2019, not a good position to be in as a race team.  For Joe Gibbs Racing, they are rapidly seeing that their young NXS protege, Christopher Bell, is maturing maybe somewhat faster than they had anticipated and currently have zero open rides with their MENCS cars.

Alas, LFR has a problem with an open seat and looking for a young hotshot to chauffeur their car in 2019.  JGR has more race car drivers that race car seats for 2019, four cars and five quality drivers.  If you put these two problems together, LFR could help JGR with their problem and/or JGR could help LFR with their problem!  Just put Christopher Bell into the LFR No. 95 and both problems are solved with a stroke of the pen!