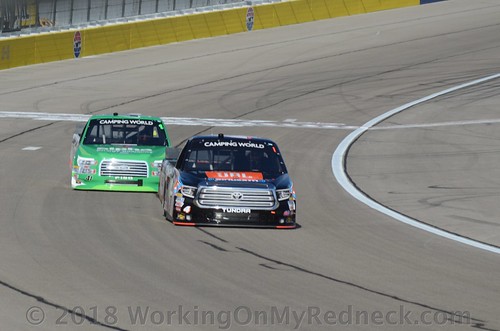 Event:                          UNOH 200, Race 15 of 23, 200 Laps – 55/55/90; 106.6 Miles
Location:                      Bristol (Tenn.) Motor Speedway (0.533-mile oval)
Date/Broadcast:          Aug. 16, 2018 at 8:30 p.m. ET on FOX, MRN and SiriusXM NASCAR 90
What You Need to Know
Todd Gilliland, Driver Q&A
Does going into Bristol give you more confidence since you have won there in the past?
“I think before the K&N race I didn’t have much confidence going in there, but then after going there in the springtime with my same team, a little different race car, but I have all the confidence in the world in them that we can do it again.”
Describe a lap at Bristol:
“It goes really fast. You don’t have much time to think about anything and that’s the biggest thing is kind of go out and do it instead of a place like Michigan, or Pocono, where you have so much time to think about the things that can go wrong.”
Winning this race is your last chance to make the playoffs. Are you glad it’s Bristol versus an intermediate track?
“I feel like everyone at Kyle Busch Motorsports (KBM) brings such fast trucks everywhere that we’ve had a chance to win every week when we show up to the race track. I do have confidence in myself there being a short track, but as far as the truck goes I think we have a chance to win every week.”
Todd Gilliland Career Highlights
Todd Gilliland’s No. 4 Banfield Pet Hospital Tundra:
KBM-043: The No. 4 Banfield team will race KBM-043, for Thursday’s race at Bristol. This Tundra was previously part of the No. 51 team’s fleet and raced three times this season by Brandon Jones (ninth at Kansas and fifth at Chicago) and Spencer Davis (ninth at Texas).
KBM Notes of Interest
Kyle Busch Motorsports No. 4 Toyota Tundra 2018 NCWTS Box Score:
TIL NEXT TIME, I AM STILL WORKING ON MY REDNECK!