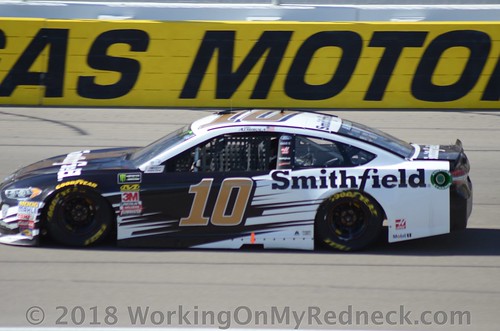 ● Through the first two green-flag runs, Almirola reported he was “getting hurt” on the restarts because of starting on the inside lane and competitors against the door of the No. 10 machine.

● On lap 27 Almirola pitted during the competition caution for fuel and two right-side tires. He restarted 11th and worked his way up to the seventh spot on lap 53.

● The Tampa native pitted at the conclusion of the stage for four tires and fuel. Almirola came down pit road in seventh and came out 12th.

● During the fifth caution on lap 75, Almirola pitted from ninth for fuel, two right-side tires and adjustments. He restarted 16th after different pit strategies played out.

● The caution was displayed on lap 85; Almirola stayed out on the track and restarted 11th on lap 87.

● The balance of the stage was under the green flag, and Almirola ultimately completed it in eighth.

● Before the start of the final stage, Almirola visited pit road for fuel, four tires and adjustments to his Smithfield Ford.

● Almirola started the final stage in the seventh position and ended it 25th.

● The eighth caution was on lap 134. Almirola stayed out and restarted seventh on lap 143.

● The 34-year-old made a scheduled green-flag pit stop on lap 172 for fuel and four tires.

● The remainder of the event ran under green, and Almirola finished seventh.

● Harvick’s victory in the Consumers Energy 400 marked the 53rd overall win for Stewart-Haas Racing (SHR). It was the organization’s 48th points-paying Monster Energy NASCAR Cup Series win and its third at Michigan International Speedway in Brooklyn.

● SHR swept the Monster Energy NASCAR Cup Series races at Michigan in 2018. Clint Bowyer won in the series’ June visit to the track.

● This was SHR’s 12th Monster Energy NASCAR Cup Series victory with Ford. The team won its first race with Ford when Kurt Busch captured the 2017 Daytona 500.

Aric Almirola, driver of the No. 10 Smithfield Ford Fusion for Stewart-Haas Racing:

“It was a solid day. We ran top-10 in both stages and finished top-10. It was finally a normal weekend for us where we had good speed and executed all day. We had some bad restarts and had a couple stops on pit road that we struggled on, but overall it was a decent day and a good way to build our momentum back as we head into the playoff stretch.”