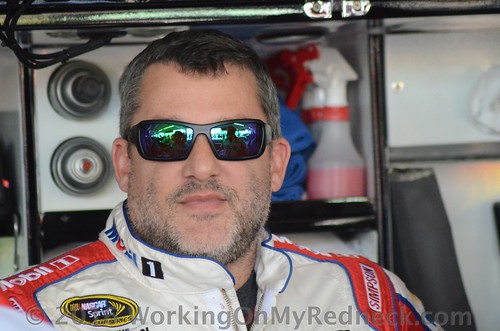 Tony Stewart says another run at the Indianapolis 500, perhaps as soon as next year, is not out of the question.

The 1997 Verizon IndyCar Series champion and three-time NASCAR Cup champion semi-retired after the 2016 season, though he continues competing in dirt-track events in addition to co-owning his NASCAR team.

Stewart told reporters Tuesday that if he does come back for a sixth attempt at the Indianapolis 500, he wants to do it the right way.

“I’ve been there and ran it. If I go, I’m not going just to run it,” Stewart said. “I don’t want to be a sideshow like Danica (Patrick) was at Indy this year. If I go, I want to go feeling like I’ve got the same opportunity to win that everybody else in the field does.”

Stewart, 47, drove in five Indianapolis 500s from 1996-2001. He qualified second as a Team Menard rookie in 1996 but started on the pole following the tragic death of teammate Scott Brayton in a crash during practice. Stewart qualified second again in 1997, when he recorded his best Indy 500 finish of fifth place. He qualified fourth in 1998, his final full Indy car season with Team Menard before moving to NASCAR.

Stewart returned to the Indy 500 in 1999 and finished ninth for Tri-Star Racing. Chip Ganassi hired Stewart to drive in the 2001 Indy 500, when he qualified seventh and finished sixth.

Always the competitor, Stewart sounded hungry for a chance at competing on the Indianapolis Motor Speedway oval again, but knows it would be difficult going up against the full-time drivers.

“It’s an insult to the guys that do it every week to show up and think that you’re going to be as good as those guys are,” he said. “They’re on their game, they know their cars. They know how they need their cars to feel in practice to be good for the race. It’s foolish to think you can just show up and be competitive and have a shot to win. If I were going to do that, I would definitely want to run at least one race (before Indy). One race may not even be enough to be where you need to be.