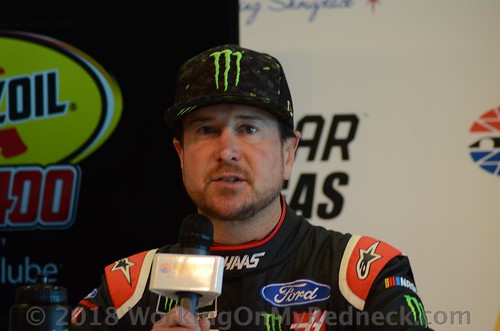 This week there has been some rumblings and rumors that seem to be floating around the garage about Kurt Busch, Stewart-Haas Racing, and Chip Ganassi Racing.  There are claims that Kurt Busch may have talked with Chip Ganassi about joining that race team in 2019.

The word in the garage is the former NASCAR Cup Series champion and one of his current sponsor, Monster Energy, will join Chip Ganassi Racing next season, sources with knowledge of the proposed deal have reported.

Busch, 40, is expected to drive the No. 1 Chevrolet for CGR, replacing veteran Jamie McMurray, who is in the last year of his current contract with the team, multiple sources confirmed.
Over the past couple of years, Kyle Larson has been the torch bearer at Ganassi since he joined the team. Jamie McMurray hasn’t won since 2013, while he manages to bring the car home more often than not he hasn’t shown the speed Larson has. Unfortunately for McMurray, his average finish in 2018 is 19.5, nearly 5 positions lower than where he was in 2017. Some of that is the struggle with the Camaro body but others have managed to adapt.
Meanwhile, Kurt Busch has seen his average finish this year increase from 16.5 in 2017 to 12.8 in 2018. The Stewart-Haas Racing Ford package is the class of the field in 2018 but Busch has shown no signs of slowing down. He seems to be forgotten about at SHR this year behind Kevin Harvick’s dominance, Clint Bowyer’s wins and Aric Almirola’s near wins. And once again Kurt is left wondering if his ride is in danger for 2019.
According to SHR earlier in the season, they expect all four drivers back in 2019. Busch’s seat has always been viewed as Cole Custer’s future seat and in 2019 it very well may be. Monster Energy operates on a one year deal and HAAS Automation does as well, leaving Kurt in a spot that makes him inquire elsewhere.

Busch would be a great fit at Ganassi. He still possesses raw speed, talent and a desire to win and Chip loves to say that he likes winners. Not to mention Ganassi fields a super competitive IndyCar team in case Kurt ever wants to take another shot at the Indy 500.

Give us Larson and Busch as teammates next year. They’re two guys that can literally drive anything anywhere. Larson could benefit from a teammate pushing him as well.