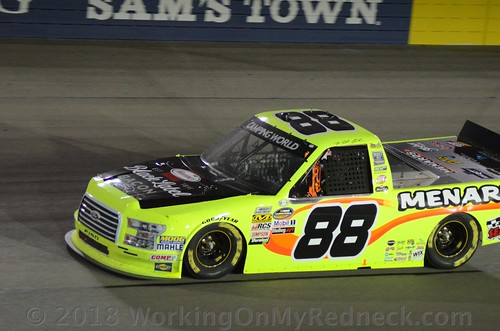 Team Info/Stats:
Crew Chief: Carl “Junior” Joiner, Jr.
Driver Point Standings: 6th
Owner Point Standings: 8th
Playoff Position: 8th
Spotter: Stevie Reeves
News and Notes:
Chatting with Matt Crafton…
“Michigan is a home track for Ford Performance, and somewhat of a home track for ThorSport Racing being two hours from the team’s shop. I like going to Michigan because it is so close to the shop, and we get to see a lot of the guys and families who work for the race team. Drafting partners and working with teammates will be key this weekend, and we’ve been pretty strong there in past. We’re working to get a win, not only locking us into the Playoffs but also for Ford at their home track.”
TIL NEXT TIME, I AM STILL WORKING ON MY REDNCK!