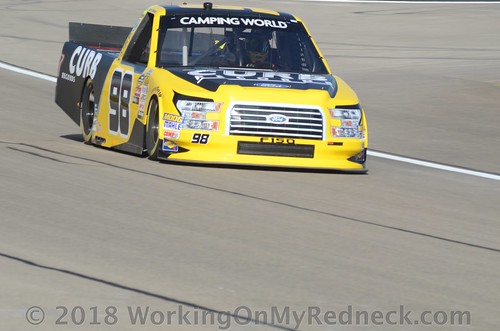 Team Info/Stats:
Crew Chief: Jeff Hensley
Driver Point Standings: 3rd
Owner Point Standings: 4th
Playoff Position: 6th
Spotter: David Pepper
News and Notes:
Chatting with Grant Enfinger…
“I’m looking forward to getting to Michigan this weekend with Champion Power Equipment. I feel like we’ll have a good Ford F-150 there. We weren’t happy with our performance there last year – we weren’t terrible, but we weren’t where we needed to be. We’re making a couple of adjustments from that, and we’ll work really hard on Friday in practice, and we should be there for the race.”
With the Playoffs approaching, how important is Michigan, and what makes it different than other tracks this season?
“Michigan is kind of its own animal. It doesn’t really drive like a mile-and-a-half to me, and it doesn’t drive like a speedway – it’s somewhere in between. We’re right at wide open the whole time, but we’re fighting for the middle of the track which is different than anywhere else we go. It’s a bit of a different mindset you have going into Michigan, and I’m fortunate enough to have ran there the past couple of years. We weren’t bad, we weren’t good, but I feel like myself and [Crew Chief] Jeff Hensley have a good plan for it to be good for Saturday.”
You’re competing in your manufacturer’s backyard. How special would it be to get a win at Ford’s home track?
“It’s huge, racing here in Ford’s backyard. It’s definitely on everyone’s mind when we go to Michigan. It could be huge – we’ve been fortunate enough at ThorSport to have some pretty good momentum the last few races here, so hopefully, we can scratch off a win for the No. 98 guys, Champion and Ford.”
TIL NEXT TIME, I AM STILL WORKING ON MY REDNCK!