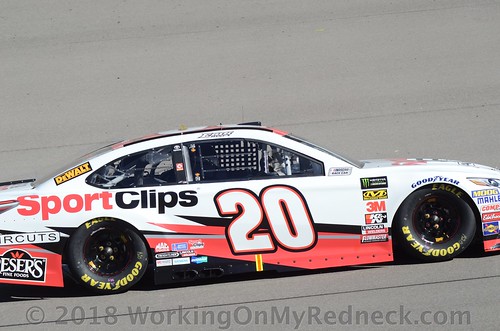 Ryan Newman scraped the guard rail near the top of the esses in opening practice after posting the 13th fastest lap in the session. Denny Hamlin lightly brushed the Armco barrier at the bottom of the esses and lost practice time while his team made cosmetic repairs…

Chase Elliott jumped to the top of the speed chart with 15 minutes left in Happy Hour, running a lap at 124.520 mph in the No. 24 Hendrick Motorsports Chevrolet, as final practice, produced a more eclectic mix than the first session did. Hamlin was second fastest at 124.365 mph. Aric Almirola (123.979 mph) had the third quickest lap in the No. 10 Stewart-Haas Racing Ford, with Sunoco Rookie of the Year contender William Byron fourth on the speed chart at 123.977 mph. Former Bondurant Racing School instructor Michael McDowell (123.911 mph) had the fifth best lap in the No. 34 Front Row Motorsports Ford.